UNCLE ACID AND THE DEADBEATS INTERVIEW: “I went from having normal work colleagues to passing Tony Iommi in the corridor” 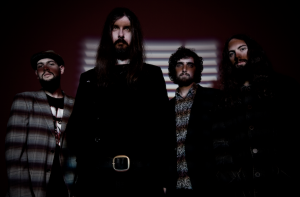 Earlier this year the group known as Uncle Acid & The Deadbeats released their fourth full-length ‘The Night Creeper’ on Rise Above. Forming in 2010 as the project of Uncle Acid himself, musical mastermind Kevin Starrs, the band put out their debut ‘Volume 1’ on CD-r and limited it to just 20 copies. A year later a split with Danava and another album, ‘Blood Lust’, this time limited to 100 copies saw their name uttered in underground heavy metal circles. Everyone wanted to know who they were and how they managed to so perfectly capture the occult rock vibe everyone was trying so hard to copy in the wake of Ghost’s universal success. It made sense that the band would sign up to Ghost’s label, Rise Above, for third album ‘Mind Control’ and that partnership saw the group tour the world, even at one point with and at the request of their musicals heroes, Black Sabbath. That a band from Cambridgeshire can go from hand-copying albums in their front room, making just 100 for friends, to being asked personally to open for rock Gods is testament to Uncle Acid’s unique appeal and their own path to greatness. As the band wrap up another tour, we spoke to Uncle Acid about his band’s new album and future ambitions.

‘The Night Creeper’ appears to have an underlying horror theme running throughout – to what extent would you agree?
“I wanted it to have a really raw, disgusting sound which I think it does. In terms of the concept, it’s a pulp story about a serial killer that’s been created by the media to cover up murders committed by a high-ranking police officer. They’ve blamed the crimes on a psychotic homeless guy that they’ve called ‘The Night Creeper’. For me, I had 1950’s New York City in mind when I wrote it, but some people have said it has a Jack The Ripper era feel to it, I guess because of the cover. It doesn’t really matter, it’s all open to interpretation.”

As an album, how difficult was this record to make for you?
“It wasn’t really that difficult once I had a clear picture in my head about what I wanted. Sometimes the difficulties can be knowing when to stop with ideas. For example on ‘Slow Death’ I kept layering so many different effects to build it up, but at some point you have to realise when the song has finished.”

If The Night Creeper appeared in your dreams/ nightmares – what would he look like?
“He would look like your average, every day person. Or maybe like a vile looking Gideon Osborne type character!”

After the success and, arguably, press hype/excitement of ‘Blood Lust’, do you think its follow-up ‘Mind Control’ satisfied the fan hunger?
“Probably not, but I don’t write for other people’s expectations anyway. You can’t always give people what they want or expect. Everyone wanted the instant gratification and the same vibe that ‘Blood Lust’ gave them. I went out of my way to make sure ‘Mind Control’ felt different and could stand on its own.
“I think with ‘Mind Control’ and this album, you might have to put in the time to fully appreciate them. Some of my favourite albums are the ones that I didn’t really get upon the first couple of listens.”

Most bands would say that their current work is their best, to what extent is that a sentiment that rings true with yourself?
“I think you need to let some time pass before you can really have any perspective on it. I listened to the album so many times when I was working on it that it’s difficult to have a clear idea of how it stands up to everything else. In 20 years time, I think it could be seen as a ‘fan favourite’ like ‘Vol. 4’ or something. I really love the album, but then again I enjoy all our albums because I write for my own tastes.”

How important do you consider movies to be an influence on the music you create?
“Movies are a very big influence on our music. It’s more genres of film rather than anything specific. So for this album it was a lot of film noir and some Giallo also. The idea is to translate what I see visually into audio terms. So to recreate film grain and shadows that I would see in a film noir for example, we used tape with a little hiss kept in, some grainy fuzz pedals and kept things almost muddy to the point where it can be difficult to distinguish between instruments. A lot of people have a problem with the sound on our albums but to me it all needs to be consistent to the rest of what we do; the lyrics, the artwork, the videos, the sound… it’s all linked. We’re the audio equivalent of a B-movie. It’s a very low budget, DIY approach, which is unusual today. We’re not trying to give you a glossy Hollywood production.”

On the back of ‘Mind Control’ you supported Black Sabbath. At what point did you stop pinching yourself?
“I don’t think it ever really sunk in! Spending every day with your favourite band, watching them soundcheck and then watching them play every night, it was unreal. I went from working a normal day job and having normal work colleagues to all of a sudden passing Tony Iommi in the corridor every day! It was all very bizarre!”

What do you remember about meeting them for the first time? What did you learn from that experience?
“I think the first meeting was a bit of a blur to be honest! What always fascinated me though was the amount of time Iommi would spend on tweaking his sound for every show. Every venue is different and he would arrive early and stay around after soundcheck to work on getting the best guitar sound possible. Even this far into his career, he still cares about what people are hearing out front. As a guitar player it was pretty inspiring to see he still has that passion for his instrument.”

I understand you actually scrapped some of the initial plans for ‘The Night Creeper’ after touring the US. What happened, can you elaborate and how did it affect you and the creative process?
“I just decided to change the direction a bit. I wasn’t really feeling the songs that I wrote, so I wrote some new ones. After the US tour we had nothing else booked, so my mind was completely clear for the first time in a few years. Not having anything else to distract me meant I was able to write a whole load of new songs that I felt were better.”

As a band somehow you have managed thus far to create interest way beyond the ‘typical’ Black Sabbath fan. What is it that that makes UA&TD such an interesting proposition to that wider audience?
“Probably the melodies. Also, there’s a wider range of influences in the music than some people might realise. If all you listen to is metal, then all you’re going to hear in our music is Black Sabbath. Obviously, they are a big influence, but to some people we just sound ‘exactly’ like Black Sabbath. It’s funny, I don’t remember Black Sabbath having two vocalists in the band singing close harmony on every song! It does make you wonder what some people hear when they listen to music. I had an interview recently where the guy refused to believe that there was a ’60s girl group influence on our new album. He couldn’t pick up on the girl back-up singers in ‘Downtown’ or ‘Pusher Man’ that are direct nods to The Shangri-Las and seemed to be implying we were lying or something. Because he had no point of reference, it meant that we couldn’t possibly be inspired by something outside of what he listened to.”

How important is it for you to continue the mystique you have built around the band,? Why was that something you had chosen to do? Most bands tend to thrive off social media and engaging with fans on every level…
“Most bands probably enjoy the attention or whatever it is, but I’m the complete opposite. I won’t do things that I’m not comfortable with regardless of how it affects our career. I don’t buy into all the over self-promotion that goes on. Nowadays you’re almost expected to have a Twitter account so you can promote and share absolutely everything. We’ve proved that you don’t need to go down that route. We sold out our first ever US tour off the back of very little promotion from anyone. All we’ve really had is enthusiastic fans spreading the word about our music amongst themselves. To me that’s a more organic way of doing things than whoring everything away on social media. If it costs us in the long run, then so be it. I’ll be able to live with the fact that I ruined everything on my own terms!”

What are your hopes and ambitions? Looking back at 2015 and towards 2016, what do you consider highlights of the year and what do you hope is to come next?
“Just having a new album out is a highlight for me. When you work so hard on something and it comes out how you want it, it’s a great feeling. In terms of next year, we’ll see. There’s never any long term goals. We’ve got Levitation fest in Texas next year with Brian Wilson and Sleep so I’m sure that will be pretty mind blowing!”