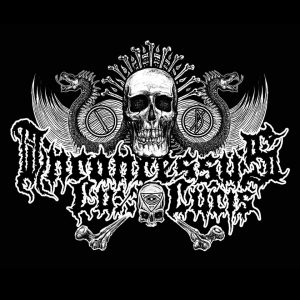 Distinguishing yourself from the glut of occult black metal in the current musical climate can be a difficult task; recycled sounds and copycat presentation bury many bands in a quagmire of stagnation and indifference. Rarely do bands show a passion and creativity that holds them apart from the herd, even rarer still do they have the talent to translate this drive in actual quality heavy metal that holds its head above the crowd – Inconcessus Lux Lucis deserve this accolade.
Wrapped up in saturnian black magick, Inconcessus Lux Lucis conjure black metal in the veins of masters Bathory, Celtic Frost and Venom – comparisons bearing as much to the spirit and atmosphere created by their winding song structures rather than a straight up tribute. Augmented by the raw energy of Motörhead and 70’s proto-punk of The Stooges, live shows are a tribute to death and disembodiment of the band and crowd.
Inconcessus Lux Lucis have been sharpening their steel since 2009’s demo ‘Part 1. The Awakening Of Him’, joining forces with Russia’s Nomos Dei Productions to release their first EP ‘Severed From Sephiroth’ and full length ‘Disintegration: Psalms of Veneration for the Nefarious Elite’. Allowing their craft to develop with the recording of their most recent EP ‘Crux Lupus Corona’, released through I, Voidhanger of Italy, the band have received increasingly positive accolades for their ability to weave traditional black metal influences with more divergent aspects of heavy metal and classic rock.
This dedication and development has attracted the attentions of reputable Irish metal legends Invictus Productions who, alongside I, Voidhanger, will release the band’s second full length ‘The Crowning Quietus’ in 2016. This support will allow Inconcessus Lux Lucis to spread their sermons further afield and build upon their raw prodigal talents… Rejoyce!