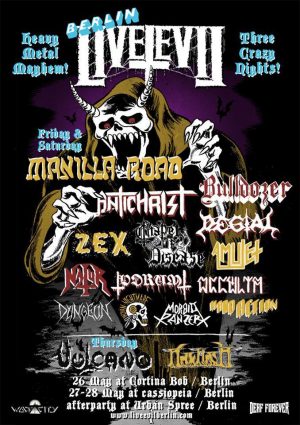 Metal is built firmly on its underground scene – this has been the case since time immemorial – and as always it falls to this underground to remind the true of what metal really means. Lucky for us here in the UK then that the fans are taking the power back, and though unable to parade a collection of bands on the scale of Monsters Of Rock, the likes of Brofest in Newcastle and Live Evil Festival in London are standing defiant in the wake of mediocrity and plastic music by showcasing raw talent direct from the coalface.

Live Evil, as you’ll most likely be aware, saw its debut back in 2010 and began initially as a weekend platform for bands selected by Gylve “Fenriz” Nagell (sticksman of Darkthrone) as his ‘Band of the Week’ picks. Whether or not you would agree with his selections is another topic altogether but with his ear surgically grafted to the underground Fenriz has become (for better or worse) a litmus test for what is considered the best in true metal. It fell to the brains behind Live Evil then to gather these denim and leather hordes up like mulleted, Pils-soaked Pokémon and thrust them in front of the London scene to battle it out.

2010’s inaugural trial by fire saw British heavyweights Angel Witch headline, flanked by Brazilian legends Vulcano and a wealth of other talent spanning black, death, doom and “metal-punk”. One of the festival’s success-stories is that in this same year organisers, Marek and Mark, scored the second ever live appearance of Ghost who, now monumental on the world stage, will support Iron Maiden in Scandinavia this summer.

This is no uncommon occurrence for these underground warriors either with groups like In Solitude, Vampire and Morbus Chron all finding themselves firm fixtures on full scale tours of Europe as well as tape-decks and record players the world over since gracing the Live Evil stage. Okay, this might not be solely down to the festival but it goes some way to illustrate the keen eyes and ears of those involved in organising it.

Last year’s instalment (the festival’s fifth to date, with a hiatus in 2012) was not only arguably its strongest line-up yet but also its most ambitious in terms of scale. Moving from Camden’s pokey Underworld venue into Tufnell Park’s arena-by-comparison The Dome has only helped with this but little has changed in terms of attitude. Fenriz is still seen as the festival’s mentor but the roster now sees the curators allowing themselves to be trusted with more of the selection. And trust themselves they should as 2015 saw a plethora of experiences on offer from the break-neck Friday pre-show where Swedish death dealers Vampire obliterated the smaller downstairs venue, to the first ever UK appearance of Italy’s legendary Bulldozer; whose audience was a never-ending stream of smiling crowd-surfers. Brit punks Chaos UK rubbed alongside Teutonic epic doomsters Atlantean Kodex, while semi-obscure ’60s rockers Stray held their own flawlessly against the arguably more obscure bands like Mindless Sinner. And this is the beauty of Live Evil. They recognise that metal and rock is an unspoken, intangible attitude and approach. It’s not about having the correct patches or rocking a paedo moustache (though to many it would seem a prerequisite to entry, judging on the majority of the crowd members style choices) – it’s in the sweat and stories of the 60-something year old blokes still giving it some in Stray while a young crowd watch adoringly, and it’s in the same crowd being swept up in religious fervour by Italy’s occult black metal masters Mortuary Drape.

This is where Live Evil shines and like many festivals it’s also a sanctuary from the humdrum of the day-to-day, providing two days and three nights of untamed and unchained metal fire; gifting half memories of meeting those Swedish guys and dolls with Gotham City logos hand-painted on their jackets for the first time, or the hard as fuck and morally-dubious Polish black metallers who offered you a bellyful of contraband moonshine (maybe that was just my experience) until it’s all over way too quickly. And the aching nag of Monday’s return to work hangs on whether you miss your bus home or deliberately imbibe another warm beer sneaked in from the off-license over the road so you make damn well sure you miss it.

So what of the fate of 2016? This year London will be sharing its usual dose of death in fire with another capital as Live Evil is branching out into Germany with a maiden Euro instalment called ‘Live Evil Berlin’ in May. We are assured however that the main festival will take place in the UK again but the strength of the Berlin line-up is already causing many fans to consider saving their pennies for a trip to see the likes of death metal oiks Degial and Vorum together with Bulldozer, Amulet and Manilla Road. The list will no doubt become even stronger as time goes on and for those of us waiting on the UK announcement, what the Germans have in store certainly has our swords wet like young girls in their prime.