AUTOPSY INTERVIEW: “THERE’S ENOUGH DEATH METAL IN THERE TO CHOKE A ZOMBIE’S UNCLE” 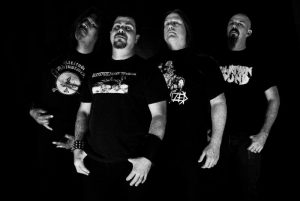 California’s legendary pioneers of sick and twisted death metal Autopsy released a platter of splatter late last year via Peaceville Records, the first of which was ‘After The Cutting’, a monster of a collector’s release that will feature four discs worth of material. We got in touch with vocalist/drummer Chris Reifert to get more of an insight into these releases…

What? Autopsy sneaked out two new releases in 2015, why are you being so kind to us gore junkies?
“Well getting right down to it, Peaceville approached us and said they were wanting to do an Autopsy box set. Sounded great to us, especially since we got to pick out the whole track listing, which is spread out over four discs; 82 songs and five hours, that is! There’s enough death metal in there to choke a zombie’s uncle, enticed yet? This rotten puppy has studio cuts from all of the albums and EPs, the original ’80s demos, unheard live and rehearsal stuff, a rare track by the very obscure Grave Violators, and to top it off, the new EP, ‘Skull Grinder’. And there’s a full-length book in there written by Dennis Dread with tons of pics, memorabilia, and all kinds of cool stuff. Socks will be rocked off.”

The artwork for this release by Kev Walker is very gruesome and graphic. How did you end up working with him again and how did the artwork concept come about from start to finish?
“We had recently gotten back in touch after many years and it was right around the time we needed to find an artist to work with. The planets lined up, ya know? As you may know, he did the ‘Surgeons’ Severed Survival album cover for us as well as the ‘Mental Funeral one’. We thought it would be cool to work with Kev again and have him show what happened after the scene on the ‘Severed Survival’ cover. What were those surgeons up to, anyways? Hence the title, ‘After The Cutting[, we gave him an idea to run with and he did just that, and brilliantly. I can’t wait to see it tattoo’d on peoples faces!”

There was also new Autopsy EP ‘Skull Grinder’ featuring new material, can you please tell us a bit about this and what the readers can expect, we guess there won’t be a drastic change in style and approach anytime soon!
“It’s a muthafuckah, that’s for sure! It’s seven brand new songs. Fuck it, it’s 28:30 long at any rate, so call it what you want. Just don’t call it boring! If you liked us before, you pretty much know what you’re in store for. If you’re not into us at this point, this thing ain’t gonna change your mind. No drastic changes, just pure brutality, horror and tales of hellscapes drenched in gore, guts and sickness! What you’d want from us, ya know?”

The album artwork was once again done by Wes Benscotter, how do the artwork concepts initially come about, do you give Wes a clear written spec or a just a title to work with?
“Wes absolutely crushed it yet again. He really outdid himself this time. We freaked when we first saw the ‘Skull Grinder’ art and are still freaking out on it. Death Metal art perfection! With Wes, we usually just give him a title to go with and maybe some lyrics, then he’s off to the races. Normally we’ll give him a little input along the way, but this time we had nothing to suggest at all. It blew us away, really. I can’t wait to see it tattoo’d on peoples skulls!”

The new album art has been described as some of his sickest art yet, would you agree? Autopsy have had some very graphic album covers over the years, on a sickness scale of 1 to 10 (10 being at the top of the sickness scale) where would you rate the art for the album? Has he outdone himself this time in your opinion?
“It’s sick as hell, that’s for sure! There’s no scale needed for ‘Skull Grinder’, just crank up the record and get lost in the painting. And turn off that goddamn phone! Album covers are important, they set the mood and tone of the album. You should want to stare at the cover for the duration of the listening experience. Take the ride!”

You recorded once again at Fantasy Studios in Berkeley, what do you like so much about recording at this studio?
“Fantasy rules, what can I say? We get treated like family there, it’s a badass place chock full o’ musical history and we get the sound we like, thanks to Adam Munoz, our partner in audio gore. Hey, it’s even close to home! Funny enough, even if we wanted to go back to any of the other places we’ve recorded before, they’re all gone. Closed for one reason or another.”

Typically what is the Autopsy recording process like, do you record a lot of takes live with minimal overdubs? What is the preferred method in the studio?
“It’s always the same, tried and true since day one of the band’s recording history. We record guitars, bass and drums live to start with. If the drums are good, we keep the track, if not, we start over. Then if there’s any guitar or bass fuck ups, we fix those. Then we add lead guitars and vocals, then mix it down. Voila, you have an Autopsy album! I always let people know that this is the real deal, no click tracks, no scratch tracks, no triggers, no sampling or any of that nonsense. We’re a real band and we’re not afraid to be imperfect.”

What kind of atmosphere and images do you want to conjure up with the new album? Lyrically what has inspired you to put pen to paper this time?
“Well, here’s the titles, see if they push your buttons: ‘Strung Up And Gutted’, ‘Skull Grinder’, ‘Children Of The Filth’, ‘Sanity Bleeds’, ‘The Withering Death’, ‘Waiting For The Screams’, ‘Return To Dead’. Use your imagination for now, then check out the lyrics. It ain’t pretty stuff, that’s for sure. As for atmosphere, I’d say the cover art captures the vibe perfectly. It’s sick, dark, eerie, gory, ugly, disturbing and brutal. Everything you should want from a death metal album!”

You are booked to play Netherlands Deathfest next week, what are your expectations for that? Will you be playing much of the new material? What are your European touring plans?
“So far that’s the only overseas show planned. That could change, you never know, but at this point that’s it. It’s run by the guys from Maryland Deathfest, and we know what to expect from them since we’ve worked together several times. It should be killer and a great time for all. I don’t know what we’re going to play at that show yet. For our immediate shows here in the US, we had a pretty varied set put together. Lots of old classics of course, a few obscure oldies, some new stuff, a good batch of stuff to initiate blood flying, skulls melting and bowels erupting.”

Autopsy is now 28-years-old as an active band, what have been some of your personal highlights in such a lengthy career and what keeps you driven and motivated to continue making some of the most sickest depraved death metal known to mankind?
“Highlights? I’d say making records, seeing people go nutzo at shows and just plain making noise in the jam room, those are all cool things. And knowing that we’ve done every little thing our way with NO compromises is pretty satisfying. I don’t know what motivates this thing to keep going. I guess if we feel the urge to do it, we go for it. It’s a simple but accurate answer. If the passion subsides, we’ll hop back into the grave again. Just keep in mind that’s happened before and we’ve clawed our way out, so who knows what the future holds. I actually prefer not knowing, it’s more exciting that way. It’s nice to see people actually showing up at our gigs, it wasn’t always like that in the old days. So now we can say we’ve played for 10 people and also 10,000 people. It’s pretty crazy! I also like seeing how dedicated our fans are, they are fucking nuts, I tell ya! It’s really them that keep this thing going, otherwise it would just be us drinking beer in the rehearsal room. Not that there’s anything wrong with that, but it’s cool to be appreciated after all the trials, tribulations, misery, victory and flat out insanity. Thanks, fiends! I also love the thrill of recording and seeing a new album turn into reality. That never gets old! Speaking of which, check out ‘Skull Grinder’ and ‘After the Cutting’, it’s more Autopsy music to turn your mind into runny cream cheese. And we know just how enjoyable that is!”