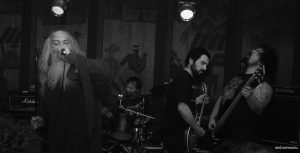 A South American band with a Belgian singer, King Heavy have a story as inspiring as their doom-drenched heavy metal. That the four-piece assembled in one place for the first time back in 2014 to tour Chile, Peru and Ecuador – vocals and music for both 2012’s ‘Horror Absoluto’ EP and their self-titled full-length, released by Cruz Del Sur last year, were recorded on separate continents, synthesized with the aid of the internet – is not even that story’s most inspiring aspect. It is the passion which they have equally for the music that is, of necessity, only a part-time part of their lives and for their children – the band’s two lynchpins, Chilean bassist Daniel Pere’z Saa (ex-Procession) and vocalist Luther ‘Luce’ Veldmark (Hooded Priest, Witchsmeller Pursuviant) each have two – which really strikes a chord. “I have two ladies evil. They are the light of my life,” says Daniel when asked if Luce, the band’s eldest member by a margin, is the only one with offspring. (Note: drummer Miguel Canessa became a father in January, after this correspondence took place). “Isi, who is seven-years-old, sings very good, and Fran, she is very much a true rocker. She loves King Heavy, Judas Priest and is a big fan of In Solitude. It’s amazing.”
On that age difference, Luce is coy; “Let’s say that the instrumental musicians differ less in age in between each other than when compared with me,” he quips, prompting mirth from Daniel. “Indeed Luce isn’t a young man. But it’s good to differ in age in our band, the experience and anxiety make a good combination.”

What happened at Doom Shall Rise 2009, when Luce gave the band its name?
Luce: “I met Luis Moya (at that time the drummer of Procession) on the first night of Doom Shall Rise and had a great chat with him and some drinks. He told me he was playing at the festival, opening up on the last day. I made sure that I was on time, which is usually a problem. I really wanted to see them. I remember Daniel walking on the stage, an impressive personality for sure. Then magic happened. Procession really blew the audience away with their top class doom. And ‘that bass player’… Daniel really had some pretty neat bass lines and to add to that his stage presence was really ba(da)ss! I ran into him later that day and got drinking together with him and Thomas, singer of Griftegard (who also slayed that weekend). Ever since I saw Crowbar I had a kind of Platonic idea of forming a band which would be called ‘King Heavy – mark the ‘ in the beginning of the name – with heavy people and equally music. So I proposed we form a band, but it was Daniel with whom I remained in contact in the long run.
“Later on he started jamming with Matías [Aguirre, guitars] and Miguel, and after they were jamming for a while, Daniel told me that he had found a guitar player and a drummer. They sent me demos recorded in Chile, for which I recorded vocals in Belgium, after which they all wanted to make the band King Heavy happen with all four of us despite the distance, a fact for which I’m very grateful.”

Is it correct that Daniel proposed the theme be “war” for your first release, the ‘Horror Absoluto’ EP?
Daniel: “When I’m writing the music I think our sound is like a preparation for war, but Luce can take it beyond that, of course.”
Luce: “Daniel indeed proposed me to write lyrics about war, but my inspiration lies elsewhere, although I’m pretty obsessed with nuclear warfare. The imminent and brutal aspect of the bombing of Hiroshima and Nagasaki is pure doom, in my opinion. Although it won’t happen soon that I write about warriors or machine guns, I think that a more general war theme might appear in the future. Let’s say Daniel earns it to have his wishes granted.”

The final song on full-length debut ‘King Heavy’, ‘He Who Spoke in Tongues’ has the line, “This is not an exercise”, which relates to nuclear war. What is it about?
Luce: “I had this idea about prophets and clairvoyants who are often greeted with disbelief and laughed away by the majority, and I wondered a bit what would happen if there is one that foresees things for real. I live close to a nuclear plant, and on a regular basis there is an exercise warning to test the alarm facilities. It always make me think what my feelings would be if one day that message warns about a real nuclear problem.”

Luce says the band Los Jaivas is one of his influences for King Heavy, could you tell us a little bit about them?
Daniel: “Los Jaivas is a band that cultivates the classic and progressive rock of the ’70s, with Andean influences. For us and especially for me, they are a reference for my musical training. I’m proud to know that Chile is capable of generating bands of that calibre. At the time their music was called Inca Rock, a sound very ‘South of the World’. They are incredible, you really have to listen to their music. They are a huge influence on our sound – like the metric in which we do a lot of our music.”

2014 marked the first time King Heavy were all together in one place, for the ‘South American Horror’ tour. What was that like?
Luce: “It was our dream coming true! I lived, rehearsed and toured with the guys for about one month. Now we have a lot of common memories together. We became tighter as a team and a band. We had already written some new songs: the opportunity to check them in a live situation surely had an impact on how they sound on the album.
“It was just natural that we would play in Chile first. The tour was arranged with a very natural progression. Our very first gig was just for friends we invited. It felt really great to do such a small-scale gig before heading to other stages. It was followed by a couple of gigs we could easily drive to by car. Then we did a small tour together with our mates of Marchafunebre, starting 1000 kilometers away, in the South of Chile, and finishing with some gigs in the Santiago area. Then we went abroad, which was nice for me because at that moment we all went abroad, not just me.
“The response of the audience on this tour was so great, even when my band mates told me not to expect a big enthusiastic crowd. Night after night we worked as a team to fire up the audience and got them cheering along every time. Just great, first mission accomplished! I also remember well when we arrived at the House Of Rock And Blues and I asked there if they were going to remove all tables and chairs: they simply answered, ‘No’. This was the first gig I ever was on stage with a crowd solely on chairs and tables, but even that one turned out great! Flying to Peru, sleeping some hours and then doing the gig with an amazing crowd and partying all night until we had to leave for the airport to play in Ecuador was sure fun and special. When I saw the pictures taken at the airport I noticed my eyes were still quite dark; I did manage to pass the customs that way. Ending our tour in ‘the center of the world’, Quito in Ecuador, was great. Lots of credits go out to Sofia for putting doom on the map in Ecuador and organising Doom Over Quito.”

So touring South America is something King Heavy will do again, right?
Luce: “The band’s ‘Royal Headquarters’ lies in Santiago: that’s our band’s home, so to speak. I guess we’ll always do some gigs in Chile before going abroad. I do hope so.”