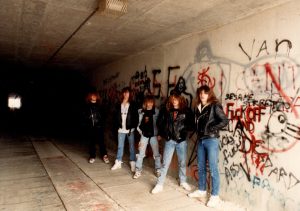 Despite their stated lack of knowledge about what they were doing, Morbid Saint would go on to become one of the thrash underground’s best-kept secrets for many years after their initial tenure. Formed in the small town of Sheboyhan, Wisconsin in November 1984, the quartet of guitarists Jay Visser and Jim Fergades, drummer Lee Reynolds and Mike Chapa on bass and vocals began jamming cover versions of everyone from Slayer to Iron Maiden to Mötley Crüe. The following year found them find the confidence to start writing their own material, but hailing from such a small town meant that the chance to both play and see shows locally were few and far between. “Any shows we did locally, typically we set up by us having to rent halls to play. Bar owners didn’t want our type of ‘violent music’ in their establishments, most of them thought we were a punk band”, says Jay Visser, but regular trips to Milwaukee, an hour’s drive away, kept them in contact with like-minded individuals.

In many respects the key to the story is one of the people the band met through their circle of friends. Eric Greif was a local promoter, producer and manager, best known in metal circles for his long-term management of Chuck Schuldiner. It took a little while, but Greif was to eventually take the band under his wing and provide them with a goodly number of opportunities.

“Eric is a great guy; words can’t express what he has done for us,” says Visser. “We met him through a mutual friend. How seriously can you take a bunch of kids playing thrash metal in the mid-1980s from a city of less than 50,000 people? It may have taken him a bit to warm up to us. Besides producing us, he also got us on many big shows, the ‘Ultimate 2’ show in Milwaukee with Death and Dark Angel, and ‘The Milwaukee Metalfest 3’, to name a few, and was instrumental in getting us signed to Avanzada Metallica, Grind Core Records, Relapse Records, and now Century Media.”

The time came, as with so many bands, for the quartet to record a demo tape. Greif booked the band into a session at Opus Recording in Gurnee, Illinois studio and, after five days, the band had completed their first recording session.

“The studio was booked by Eric,” Vasser confirms. “I believe it was a studio he brought bands that he was working with to record. We had a budget of forty hours to record, and we did it in five eight-hour sessions; three days the first time we were there, and then two days a week later to finish it. We recorded both guitar rhythm tracks and drum tracks together live. All the songs, except two, were recorded on the first take, the other two were done on the second take. The bass, vocals, and guitar solos were tracked later. We didn’t really categorise or think too much about what we were doing, it was just us doing what we did. We were a bunch of kids having fun, jamming together, making noise, so the result was what we did every day at practice. The sound of what we played and the way it turned out was a direct result of what Eric Greif, who produced it, and Alan Pangelinan who engineered it did. It was our first time in a real studio, we didn’t know what to expect.”

The results were initially released as the ‘Lock Up Your Daughters’ demo cassette; Greif then brokered a deal with the Mexican Avanzada Metálica label in to release the band’s debut album, ‘Spectrum Of Death’. Essentially nothing more and nothing less than the demo cut to vinyl, the band felt that ‘Lock…’ was somewhat unsuitable as an album title and, as a result a new title was decided. The album is also remarkable for its commissioning of some fresh artwork for the album which, in the event, turned out to have more than a passing resemblance to the mascot of a far more well-known metal band.

“We realised that the moment we saw it,” remembers Vasser. “It was completely unintentional, it’s just how it turned out. That is the same thought we had with the Eddie comparison, but we neither had the budget, nor the time to change it. We were going for a more demonic figure, with the souls of people swirling. Kind of a demonic-reaper-collecting-souls-of-the-dead type of thing.”

While talk of tours and possible bigger record deals took place, Morbid Saint found themselves, despite having one vicious record under their belts, battling the rise of grunge and while struggling to move up the ladder would not record again until 1992 when they returned to the studio, intent on recording a follow-up. Circumstances, however, were to dictate that the songs would never receive the proper treatment they deserved.

“‘Destruction System’ was to be a follow up of ‘Spectrum Of Death’. It was written after a brief hiatus of Morbid Saint. By all intent, it was going to be released by Avanzada Metallica, but because we went over budget and we didn’t have the funds to finish it, we decided to record the four-song ‘Black Demo’, which sold about thirty-five copies to help cover the expenses to finish it. By the time we gathered enough money to finish the studio work, the studio was out of business, and all assets were seized by the bank, including all the tracks for ‘Destruction System’, and the track and master tapes for ‘Spectrum Of Death’. What has been released is a quick mix, unfinished and unmastered version that we took home to listen to so if there was anything we wanted to change when we returned to the studio to finish it we could. Which never happened. It was first released in the mid 2000s I believe, on Celtic Records. The Celtic release is an unofficial release which was not approved by the band.”

Taking stock of the situation and faced with continued declining interest, the band went their respective ways. Vasser recalls that the members were essentially growing up, be it with a family, a career or a simple desire to do something different, with Vasser himself going on to establish his own sound and lighting company. The members kept in touch and occasionally played in bands together over the years. The name Morbid Saint acquired a certain status over time, to the point where original pressings of ‘Spectrum…’ were highly sought-after. In 2009, Relapse reissued the ‘Spectrum Of Death’ album which prompted the band to reform and to commence writing new material, something that, Vasser admits, is not as easy as it once was with the pressures of general life overshadowing the time and freedom the band had to devote to such tasks back in the day.

“It’s challenging for me to still be able to play the songs in the same way I did all those years ago,” he says. “Besides, down-picking all of ‘Damien’ is a bitch! But just to be able to play these songs live is an immense honour.”