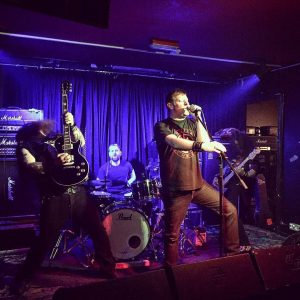 “The main influences are the Maiden, Rainbow, Grand Funk, Trouble, Scorpions, WASP, Vitus, Pentagram, Bang, Rush, Saxon, Witchfinder General, Purple and Gillan’s solo albums, Accept and Manowar,” Riddell lists. “However there is also stuff like the obvious ’60s bands – The Who, Kinks, Stones, MC5 and even the Beatles, but also a lot of the proto-metal and early heavy prog bands as well. The genre name is not really all that important; the quality is what matters, whether it’s Budgie or Bathory, Acid or Aphrodites Child.”

With members active in Sabbath-leaning music since the early ’90s, Brule’s ranks include members of Evil Kneivel, Blood Island Raiders, Mourn and Age Of Taurus, with whom chief riff-writer Alastair Riddell is still active. Coming together in 2014 Brule were quick to cut a rehearsal demo which filtered through the underground, with ‘The Devil’s Decay’ eventually to be featured on Fenriz of Darkthrone’s ‘Band of The Week’ Facebook page. Support slots with Bang, Iron Claw, Saviours and Asomvel followed. Despite a promising start, however, Brule’s experience has taught them to be philosophical about the current (relative) popularity of their chosen style.

“A lot of things are cyclical. For me [traditional metal] never went away – when I started listen to heavy music it was Slade, Maiden and Motorhead because that was what was current. I think I’m pretty lucky in that I got into music at such a great time. I was a small child when Motorhead and Maiden would be considered suitable for kid’s TV. When I started buying records heavy metal meant pretty much anything from Zeppelin to Rainbow, Rush Sabbath, Maiden, Whitesnake or Venom. When I was 9 I  had a Quo patch and didn’t think it was out of place with all the Maiden ones. The internet is of course a big part of it, although it is odd that people chase after the obscurities without even bothering to know the basics. People will track down 35 year old singles by bands that lasted for a year without even owning ‘Restless And Wild’ or ‘Mr Universe’.”

Released as a run of 20 Cdrs, tracking down a physical copy of Brule’s rehearsal demo might be difficult even for the most diligent doomer but with plans in motion for a proper studio release with Tapes From Hell imprint (run by Amulet’s Jamie Elton), it won’t be long before Brule make their way onto the cobwebbed shelves of doom metal obsessives worldwide.