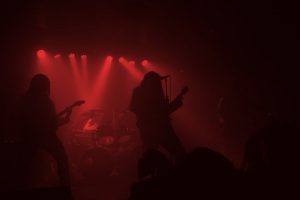 Hails A.B.S.! Please give Iron Fist a quick background history on the band.
“She’ol was formed around 2012 by me and our former drummer, A.H.S. (Vorage). We both have a longer experience in black metal but She’ol began initially out of ideas which did not fit elsewhere, closer to death metal inspired by Incantation, Sadistic Intent, early Darkthrone, Autopsy and Absu – but so too was there a significant difference in vision. We recorded a promo cassette which led to an EP or mini-album and, with members also in Hellsworn, Scythian, and Absinthropy, began playing live shortly after. This followed with a split 7” with Fōr and we have since strengthened our line-up, currently working on a new release alongside various performances this year.”

You had your debut studio recording released a little while ago as an EP on different formats (vinyl and cd respectively) via Iron Bonehead and Invictus, two well respected underground labels. Please tell the readers a bit about this recording in your own words and what they can expect from it.
“Both Iron Bonehead and Invictus did an excellent job with the EP! Despite the golden rule that only the demos and first EP are real; our first release is very much a composite of its influences which can be heard pushing and pulling in all directions. The EP consists of six tracks of which two are instrumentals and one is a cover of Darkthrone’s ‘Cromlech’. The artwork was created by Brooke Johnson (The Axis of Perdition) based on H.P. Lovecraft’s magnificent ‘Rats In The Walls’. His particular vision of horror vacui lies at the heart of She’ol both lyrically and musically. Three years on we have reworked this material when performing live but we are still proud of it.”

How many copies of each format was pressed? Can people still get hold of them?
“With Iron Bonehead there were 500 LPs, which is now sold out from the label but probably available in limited supply from the reliable distros. From Invictus, 1000 CDs, which should be available from the same places if any of them remain. We also made a cassette version which is available from us at gigs.”

How has the overall response been to that recording? Are you satisfied with it or are there some aspects you’d maybe change looking back?
“Quite positive, many seeing it as an indication of what would follow. There are elements which could be improved in hindsight, and we have done so when we perform these songs live, but as I’ve said, we’re proud of the recording despite this.”

Where was it recorded/mixed? The sound is extremely crushing and cavernous, like it was recorded in the darkest depths of some otherworldly abyss.
“Thanks, if only! The strings and vocals were recorded and mixed at A.H.S.’s home studio whilst the drums were recorded at Darksound Studios by A. Carrier (Binah, Towers of Flesh). It was mastered by D.L. (Cruciamentum) at Resonance Sound Studio whose judgement and skills I trust to bring out that dense, otherworldly sound.”

What was your aim with that recording sound-wise?
“To open the folds of the earth.”

Tell us about the band name and why you chose it? I understand you had some issues with another band called Sheol so opted to spell it She’ol and have your logo in Hebrew, a very unique way to resolve a potential issue over a potential band name copyright/confusion issue.
“Not really. The Hebrew (or more appropriately Aramaic) script of the name was intentional from the beginning because it was more evocative to the meaning of the word. The other band, who were more concerned with marketing their “brand name” than actually making music, eventually changed their name so that is an irrelevant matter. She’ol is significant in the Old Testament because it did not represent the eschatological dichotomy of Christianity’s Platonism, both the wicked and the pious would be cast into the pit of She’ol amongst the shades of the dead. The word itself is likely cognate to the Sumerian underworld Ki-Gal (literally: great place), also known as Irkalla, which was also a living deity (an Akkadian “Šuwalu” underworld deity is also attested), thus its origins lie in Mesopotamia, the cradle of civilisation. She’ol is our gateway to the underworld of the ancients.”

Who designed the very striking looking logo?
“I did. I design logos, layouts and art in my spare time.”

Please tell us about the title of that EP, ‘Sepulchral Ruins Below The Temple’…
“It’s partly a reference to the subterranean crypts in Lovecraft’s ‘Rats In The Walls’ and partly because all megalithic monuments, shrines and temples built by mankind fall into ruin and decay, inevitably honouring the great Nothingness. Below every temple is the unseen shadow of entropy, rot and Death.”

Lyrically what inspires you to put pen to paper?
“The lyrics are very visual. When writing music, each track takes place in an immersive, dimensional setting of which lyrics help to shape. When mankind became self-aware of its reality, to quantify the material world, seeking to the heavens, it returned with a madness and dread, wishing it had never known such horror. Again, I have H.P.L. to thank for this; his descriptions and extensive vocabulary reflect this vain attempt to reconcile mankind’s curiosity for truth with an arcane celestial Void.”

You recently had a new recording/release out, a split, please tell us about this? What is the meaning behind the title of your side of the vinyl once again released by Iron Bonehead?
“It is a split with the Swedish black/death metal band, Fōr. Musically there is some degree of overlap but they remind me of Grave Upheaval or Impetuous Ritual but their lyrics are based around Þursatru magick of Dark Germanic Heathenism. Fōr’s interest in Ginnungagap reflected a parallel to the waters of Tehóm, whilst Jörmungandr is parallel to Tiamat or Leviathán. The split reflects the same path within different mythological traditions – the rise of a great Chaos dragon from the Abyss of creation is one of the proto-myths of mankind (who views itself as the tamer of Chaos). As for the release itself, it is a gatefold 7” and each band’s track is exclusive to this release.”

When can we expect a She’ol full length?
“When we’re ready. There’s no point in forcing it just to pass an arbitrary milestone. We’ve been playing new material for over a year now. The writing process takes longer now that we all live in different parts of the UK but we all seem to take a holistic approach to composition.”

You are quite active as a live band, what can people expect from one of your live rituals of death?
“I’m pleased that we’ve been offered these great opportunities, though we have had to turn down some due to commitments elsewhere. What to expect? Presumably they’d expect real death metal without it being a comedy show– I’m not going to exaggerate with cliché descriptions. Maybe if more people turned up to underground metal gigs they’d know.”

You are playing Temples Festival soon what are your expectations about that?
“The Temples lineup and audience is a diverse bunch so we’re hoping that we make an impact and that the event goes well.”

Also you have some dates in Canada planned how did that come about?
“It came about because Sebastian from Auroch/Mitochondrion asked us. We’d been in communication for a few years now, and both appreciate each other’s music, I even released a cassette edition of Auroch’s ‘Taman Shud’ on my record label, Exitium, so it was an honour to be asked to perform at Covenant Festival which they organise. Expectations? Good times and evil music.”

What’s your opinion on the current death metal scene? What bands out there do you feel an “affinity” with both musically and aesthetically/lyrically?
“It’s great – it’s a growing response to the stagnation of brutal death, slam death and deathcore. Even all the Entombed-clones are a breath of fresh air. It has allowed a growing demand to warrant reissues of previously unavailable death metal (which Dark Descent and The Crypt have especially made possible). This same response has also pushed death metal towards a darker sound than ever before, as well as allowing bands to experiment with new ideas without being progressively apologetic. I’d say that early Absu are a strong comparison to our lyrics and aesthetics.”

You run your own underground label Exitium? Why did you start up this label, what releases are currently available?
“I started Exitium in 2011, initially to rerelease one of my old black metal bands, Subvertio Deus, and have put out about 25 releases since on cassette alongside a small distro. Check the distro website for what is available. I was also influenced by my disillusion of the metal scene when I lived in Birmingham. As great as it is to praise the ‘Old School’, there is an idle smugness that pisses me off about those who feel that they are owed respect just for their age. It is those who contribute that keep this culture alive.”

What can we expect from She’ol in 2016?
“An awakening of primordial darkness…”