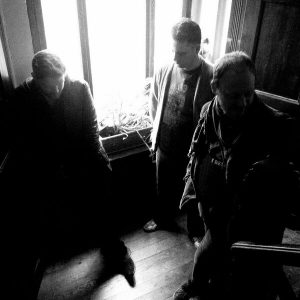 When not sticking to a good ‘ol cuppa at Europe’s most psychedelic festival, Patrick Walker is 40 Watt Sun, Britain’s most evocative doom band since, well, Warning. In Iron Fist #10 Sarah Kitteringham spoke to him about musical catharsis, influences and a potential new album…

Two years on and that album is here. To mark the release of ‘Pictures’ (scroll down for a sneak preview), a new song from the forthcoming ‘Wider than the Sky’ (out on October 14 on the band’s own label Radiance Records) we are re-publishing that article in its entirety. Welcome back Mr Walker.

Guitarist and vocalist Patrick Walker was just 17-years-old when he formed Warning. The band, and the project that followed in the wake of their final breakup in 2009 – the luminous 40 Watt Sun – inspire flagrant emotional hyperbolic description that seem entirely out of place within the realms of metal. This is music that gives you the “feels”.

Emotive descriptors aside, 40 Watt Sun’s music is slow and dense with dynamic Sabbathian bass lines and reverb soaked percussion; the cymbal work gives the music light and shade, bouncing alongside Walker’s simple, cascading riffs. The vocals are expressive and clean; in contrast the guitar tones are beefy and huge, comparatively much brighter than those used by Warning. There is a clear emphasis on songwriting, which lends to its sonic weight. In essence, less is more.

Now for the emotional impact. The Internet is awash with glowing praise and snide contempt for 40 Watt Sun’s most recent, 2011’s ‘The Inside Room’: Encyclopedia Metallum includes numerous reviews; one gives the album 12 per cent and complains that it’s “50 odd minutes of whining,” while another awards it 100 per cent and raves, “It is the quintessential album of dim and fleeting existence.”

Walker hates these descriptions, and if you read the handful of interviews available, you will see evidence of him prickling at ham-fisted questions. Yes, Warning and 40 Watt Sun create(d) music that emotes, and yes, Patrick Walker knows that the personal interpretation of music is a highly individual process. However, he dislikes being painted into corners, and doesn’t care for the polarising responses and labels applied to his music. On top of that, he is intensely private. As such, when we requested an interview, the only option we were given was email. After two rounds of messaging, he revealed the following.

Your music is very emotional, and gives a lot of hope and strength. I know interpreting music is such a personal thing, but, for you, is music a form of catharsis? You’ve already rejected the idea that the album is an “exercise in misery” and that it is more a celebration.
“To be exact, I didn’t call it a celebration. I think I was simply surprised by how many people referred to it as being depressing when I had hoped it was a little more life-affirming than that, at least. You’re right though; it’s not up for me to dictate how anybody should respond to our music. I’m not going to say the music is cathartic though; I always find it a bit excruciating when I hear musicians say things like that. I like making music because it’s just about all I’m good at. And I guess I can write about only what I know.”

‘The Inside Room’ took only three days to record and was fairly DIY. Can you tell me about the experience?
“The truth is, we booked ourselves in to The Library Studio in London, a place that William [Spong, bass] used to work at. It was just the three of us [including Christian Leitch, drums]. We got in at about 3:30 pm on the Saturday afternoon, set up, worked through the night, and left at 8 pm the following evening with everything finished. There was never a question of making the recording part of a ‘bigger operation’; we knew we had the experience amongst ourselves to do it alone and we knew we could do it quickly and for little cost. It was a good way to work.”

How did the process compare to Warning’s final release, 2006’s ‘Watching From A Distance’?
“I find all writing a struggle. It doesn’t come easy for me, unfortunately. ‘The Inside Room’ was a much more spontaneous record than ‘Watching…’. I tried to just let things happen and to not think about them too much; both lyrically and musically. But then again they’re very different bands. Warning was very riff-based music, you know? Where as I wanted 40 Watt Sun to be, first and foremost, about songwriting.”

You started Warning when you were just 17; the band was active until 2009. Looking back, do you have any particularly treasured memories of being in Warning?
“I’m certain we recorded ‘Revelation Looms’ a week before my 18th birthday, and a week after we’d played our debut show with Mourn, who I was in awe of at the time. God, I have nothing but treasured memories of those first two years of the band. We were just discovering all that kind of music, too, and it all felt like the most important thing in the world.”

40 Watt Sun is a three-piece, yet most articles I’ve seen about it seem to ignore the fact there are two other members in your band. That being said, how do Christian and William assist in music creation?
“Christian and William are genius players. They’ve got more flair and dynamic and inventiveness than I could ever wish for. I’m very lucky. I remember when I first heard Chris’ drum part to the introduction of ‘Open My Eyes’. It completely blew my mind. Or, for example, when I heard the bass line in those opening chords of ‘Carry Me Home’. You know, I have a kind of idea of how I want it to sound when I write the song, but I could never dream up that kind of stuff. Let’s just say it’s not a privilege I was familiar with in my previous group…. playing with people like Christian and William has completely raised the bar for me when it comes to both songwriting and playing.”

The band is in the process of writing the second release. Can you tell me about that?
“All I want to say for now is that we’ll be going in to a studio in a couple of months and the music is another big progression from the previous record.”

I’ve read you don’t consider 40 Watt Sun to be a doom band. What sonic and lyrical elements do you look for in music?
“I always strongly identified, and held a deep affection for, John Brenner and his music so I was very happy that we got to tour with Against Nature in 2007. John was by far my biggest musical influence in my teens and very early 20s. He wrote this wonderful emotive, progressive-sounding, dark heavy music. Oh, and of course that was also the tour where I got to know Christian, who was touring with us as part of The River. That was a really happy time for me. Sonically and lyrically? I possibly wouldn’t surprise you if I began listing stuff. My favourite musicians are June Tabor and Huw Warren. You can bury me with those records.”

40 Watt Sun just performed at Roadburn. You also performed at the festival in 2012 as well. What memories do you have of that first trip?
“I watched The Obsessed and thought it was wonderful; they were always one of my favourite rock bands. But I’m afraid to say I saw nothing else at all and spent the rest of my time enjoying some quiet and drinking tea. We did watch Sleep sound checking on Friday morning and it was so painfully loud I had to leave the hall.”