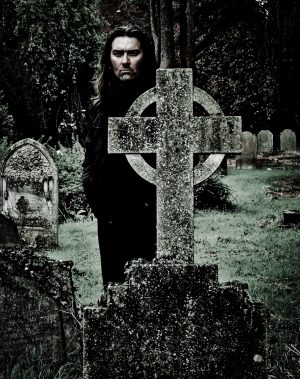 It’s almost 14 years since your last album, with an intermission of two EPs in between. What have you been doing all these years?
The Dark: As you may know I have been involved in various projects/bands and around the release of ‘The Weaving Fates’ I was predominately working with Zemial on recordings and tours. At the same time, I was very much concentrating in composing for The Watcher, a progressive rock band I formed with my brother. We made a 7″ EP recording (not released) and composed plenty of other material that hasn’t been recorded and is only in rehearsal form.
I also worked with Australian doom/heavy metal act Raven Black Night and now, although distant, we still continue our collaboration with the possibility of live shows. We did record one album, ‘Barbarian Winter’, released through Metal Blade Records in 2013.
In between all of the above I had a period of acoustic recording/performing in Australia. I have continued a lot of my acoustic work in terms of composing and recording and in the last few years I focused in creating a new Agatus album, that apart from being a natural progression to ‘The Waving Fates’ has also been a vehicle for my creativity, influences and inspirations to come through.

So, now you are back with a genre-breaking album, ‘The Eternalist. What are the elements of its creation, your inspirations and feelings for it?
It is a little hard to precisely classify the genre of this album since it is weaving in and out of various styles throughout its duration. With this album I wanted to create an oneiric and occult atmosphere with the intention of making the listener indulge deep into the music and lyrics whilst ensuring a detachment from the tired sounds and releases that have been saturating and punishing the scene.
The music on ‘The Eternalist’ was developed over several years and includes songs that were composed as far back as 1996 (‘Perils Of The Sea Pt. II’ and ‘At Dusk I Was Born’) and as subsequent songs were introduced, they would reflect my vision for the music of Agatus, embellished by some of my influences in terms of musicians and bands, most of which do not belong in the heavy metal realm.
From my side, I was highly inspired by music from bands such as Eloy, Marillion, Michael Schenker, Al DiMeola, King Crimson, Socrates Drank The Conium, Mike Oldfield, Rush and Bathory.
On the drum department, I think Vorskaath was thundering away influenced by Vinnie Appice, Steve Gadd, Tony Williams, Nicko McBrain, Ian Paice, Simon Philips, all amalgamated with his own unique style of drumming. At one point in time, we just let the music ‘feel and groove’, and I think we have several parts on the album where the drums and bass are locking in nicely as well as other parts where Vorskaath is grooving like a motherfucker.
Overall I am extremely satisfied and excited with what has been achieved. Thus far the response has been overwhelmingly positive from both an old and newly acquired audience and has given us the pleasure of acquiring a wider spectrum of fans, whilst fulfilling another aspiration.

There is an analogue vibe on ‘The Eternalist’. Give us some details on the recording procedure and which albums do you consider as the best ones regarding production?
From my perspective this album had to be an audible improvement both in the production and composition when compared to ‘The Weaving Fates’, and I feel that we managed this in this best possible way. We achieved a warm mix, steered away from modern sounds and production, simply aiming at making this as close as possible to a traditional album, even if it meant that there may be occasional imperfections. This was the vision behind the production of the album and I can assure you that just about all of our future releases will share these same characteristics where possible. We are again proud to state that real drums were used – no triggers – no sound replacements. All guitars, bass, vocals and synthesizers were recorded at my own studio, The Vault. Re-amping of rhythm guitars took place at Grindhouse Studio, where we worked with our good friend George Bokos. All guitar solos were re-amped at Studio 9, Vorskaath’s studio, together with all drum and percussion recordings. Mixing was done at Matrix Recording Studio together with Dimitris Misirlis, another good friend. Some of my personal favourite albums in terms of production are Eloy ‘Colours’, Black Sabbath ‘Mob Rules’ and Iron Maiden ‘Piece Of Mind’.

How would you describe to someone who doesn’t know Agatus?
A blend of hard and heavy metal with ’70s progressive rock moments, although I would encourage each listener to go by their interpretation of what they hear.

Describe the journey from your demo years and the first album (‘Dawn Of Martyrdom’) up to the present.
Musically and lyrically, there has been a shift from the up-front aggressively intense moments and statements that captured the essence of the early days, to more subtle lyrical concepts and better, thought-out musical passages that best represent the current state of the band. On this album, musical intensity is present in a more structured way by allowing compositions to emphasise contrast and setting the mood. The entire approach to making this album has been different to any of our earlier works in the way of gradually introducing the extravert compositional component, taking the leap into endless possibilities that could make up the sound of Agatus. Once again, expect the unexpected!

Where do you think Agatus stand in the present music scene and which are your expectations after the release of ‘The Eternalist’?
I am pleased to have made this shift in genre through this album and I envisage that whatever we do next is again going to be something pleasantly different. A new album is already in the making and I can tell you that it is far different to ‘The Eternalist’. At each moment in time I have one chance and one opportunity to leave my mark for that period and as such my aim is towards enriching my musical spectrum and compositional palette, which will allow me to express as many of the things I hope through my music.

What are you listening to at the moment?
Marillion ‘Fear’, Fates Warning ‘Theories Of Flight’ and Zemial’s ‘Repairer Of Reputations’ EP.

Any plans for live shows?
Possibly next year. We welcome proposals.