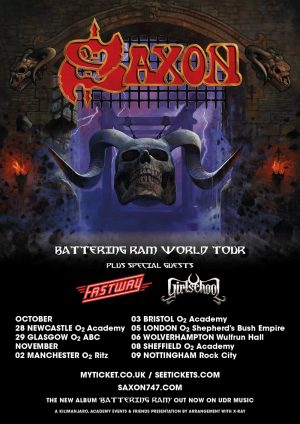 Opening proceedings is London’s loud and lairy daughters Girlschool who, though squeezed into an odd formation owing to playing in front of both Saxon and Fastway’s drum kits, ease the growing crowd into the feel of things. As they loosen up amid sound issues, they play classics such as ‘Hit And Run’ and ‘Emergency’ with wide grins on their faces, swapping jokes with the crowd and seeming to love being on stage together. They like it fast and loose like their old pal Lem, to whom they dedicate the tour – the first of many tributes to be paid tonight to the Motorhead frontman whose passing is still raw nearly one year on.

The chance to see the only surviving member of the classic Motorhead line up “Fast” Eddie Clarke, once again casting lightning bolts from his Stratocaster provides ample reason to be present tonight. Now, Fastway may not have been a band whose records found their way into everybody’s collection in their heyday, but their set tonight would make many wonder why. They deliver balls-to-the-wall rock ‘n’ roll tunes, with super bluesy passages and the soulful Plant-cum-Gillan-esque vocals of frontman Toby Jepson (previously of Little Angels), though a little rough and ready at times, send a few jaws to the floor – especially those of women of a certain age it must be said.

It is no secret though that many of us are just in awe at seeing Clarke perform again; an odd mix of being aware that you are in the presence of a legend (albeit a bashful one) but also a man whose band of brothers has ultimately thinned out over the last year or so. However tonight we have Eddie, resplendent in his leather waistcoat, with his signature Fender Strat making the air spark and showing us all how it’s done.

Saxon take to the now opened up stage, pulling no punches launching in with the title track of their latest record ‘Battering Ram’. Saxon are here to prove that even though this tour certainly has one foot in the past they are still a relevant band, penning new albums almost as quickly as they did back in the ’80s and often with strong results musically. The Yorkshire lads rightly acknowledge their part in the formation of this hallowed genre with their set spanning almost every record. Later albums such as ‘Unleash The Beast’ and ‘Sacrifice’ (which showcases their considered light show brilliantly) are visited but of course the boys lean more weightily on the side of their early material. Surprise track ‘Frozen Rainbow’ from their debut album provides a hint of dynamism amid the well-known pleasers ‘747 (Strangers In The Night)’, ‘Never Surrender’ and ‘Denim And Leather’.

The Northern horde present us with two encores that pit closer ‘Princess Of The Night’ against a super-charged cover of ‘Ace Of Spades’ with Fast Eddie joining for highlight of the show. Saxon may be among the last of a dying breed, and as sad as that might seem it can’t stop those in attendance from looking at one another in awe of the metal gods still wailing, still soaring on wheels of steel and it sure as hell doesn’t seem to bother the guys on stage who sound as tight and as heavy as ever.