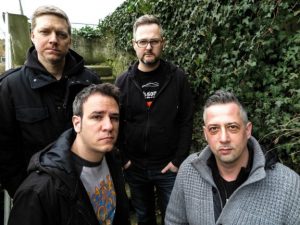 Hi Uwe, Naevus is back with a new album, please tell the readers a bit about your new recording?
“Since the release in August we’ve been very pleased with reactions. People seem to like it a lot. It’s a very strong doom metal/rock album, maybe with a slight pop appeal, if I might say that. Some times very melodic. Each song is different in structure and we tried to be creative on this. All in all, it felt so good to write and record as four friends who were together again after so many years. We had a lot of fun.”

This is your first album since the 1998 debut, what are your feelings about that album looking back?
“On my side I couldn’t listen to the album for a very long time. It was the first time in a real studio and we didn’t have too much experience. I wasn’t too pleased with the recording, but didn’t know how to make it better. The first time I to it listened again was when I received the test pressings for the vinyl re-release on Rise Above, and this, I liked a lot. The others in the band seemed to like the album constantly.”

How do you think it compares to the new album, what are the significant differences in your opinion?
“We have 17 years in between the recordings. It’s very different. I can’t tell you specific points; the songs are stronger and we have more variety in structure. Also the sound is much more compact, maybe a bit more polished than the old one.”

Where was the new album recorded/mixed?
“The new album was recorded by Claus-Peter Hamisch from Beehoover fame and Ralf Bernhardt from Black Shape Of Nexus in a hired studio. The basics were layed down in 12 hours for 12 songs (two guitars/ bass/ drums). Additional leads, vocals and extra guitars were done at home with a silentbox. It’s a 1×12″ speaker used in a closed box with one or two microphones inserted. So we can use the usual amp and guitar effects. The mix was done by Ralf as well. It was all DIY with a help from friends.”

Why did the band split up in the first place? And what instigated the return/reunion of the band?
“First, Sven [Heimerdinger, bass] quit the band and we didn’t feel comfortable to go on with a new bass player, to rehearse old stuff again and go on with new stuff. Also, we had moved to different towns, which wasn’t easy to rehearse at the time. Four years ago I met Oli [Grosshans, guitar] again. We all had loose contact over the years and we said how it would be cool to jam the old songs again. Well, and here we are again.”

Lyrically what does the new album deal with?
“It’s about personal and worldwide struggles. Taking care of the environment and trying to make things better. Lyrically we all have heavy burdens to carry. We’re responsible in our doings and we need care about each other. Maybe this comes when you’re getting old and you feel it’s necessary in doing this. The album cover is painted by Roland Scriver [Serpent Venom, End Of Level Boss]. My idea was that a tremendous force (no god) is putting all energies from the sun onto the earth. Maybe it (he/she) has to carry the heavy burden too.”

What inspired the new music and song writing of the new album? Which bands would you say help to fuel and shape the overall sound of Naevus?
“We got our style over the years. Basically the music comes from me, but is finally created by the band. First music, then vocals. Our musical influences are the same as always. The Obsessed, Trouble, Pentagram, Thin Lizzy and the likes.”

Do you plan to play live in support of the new album?
“We can’t tour but we have a few more shows to go this year, waiting for more in the springtime as we all have our timetables ready. We all have families and are stuck in our day-to-day business. We have a lot of fun every time we get together and we enjoy the time we’re playing together.”

What is your opinion on the modern doom scene compared to how the scene was at the time of the release of the debut album?
“The scene has grown bigger. The time the debut was released, I didn’t have internet at all. So today I think we have better conversations within the scene; festivals can be chosen and talking about little and unknown bands who didn’t have the chance to get out of their towns at all.”

Last words are yours…
“Thanks a lot to Stef and Lena from Meta Matter for making this possible, Roland Scriver for the fantastic artwork and of course the band for having so much fun after all those years again, and you Kat, for still being friends after almost 20 years. Get your album at your local store or online shop. Try to get the limited coloured vinyl version as long as it is available from us.”