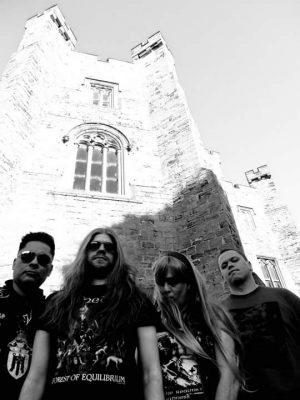 Despite the band’s collective love of all things ’80s, as individuals, they all come from completely different backgrounds with an eclectic mix of tastes. KShevil and DH both play in crust/death metal band Winds Of Genocide, with KShevil also wielding sticks for doom/death metal project Uncoffined. Guitarist SRM is originally from Mexico and is currently studying towards his PHD at Durham University. Lucifer’s Chalice is where they all find common ground: “We have very eclectic tastes individually when it comes to music. There’s one band we all find common ground with and share a mutual love for, and that is early Iron Maiden.”

The formula for Lucifer’s Chalice’s music is tried-and-tested, and the path they walk is well-trodden. However, regardless of their old school heroes and vintage sound, the band have put their own stamp onto the genre, with each member contributing their own ideas and unique style to the writing and recording process. “Myself and SRM wrote the bulk of the material for the debut recording (‘The Pact’)”, reveals KShevil. “I would send him my riff ideas via email and he would structure the songs and do home recordings, then send them to us all. We’d continue to build and expand on each song as a collective unit at rehearsal, while refining ideas and riffs. SRM brought his own riff/song ideas to the table at rehearsals too and CW contributed some riffs, which he brought with him to rehearsal and they fit perfectly into ‘Full Moon Nights’. The whole writing process was very much a collective thing and a mixture of pre written ideas and rehearsal room spontaneity.” So, what fans will be treated to is very much a team effort, with no one band member taking on the bulk of the work – a refreshing change to see a band who not only borrow their sound from the ’80s, but their hard-working song writing ethic too.

Initially only wanting to pay homage to their favourite bands, Lucifer’s Chalice now have loftier ambitions. “Our current ambitions are to play some shows outside of the local area and hopefully find a label or two to help with getting the debut recording out on physical format(s) and spread our sinister heavy metal darkness to more unsuspecting souls.” An achievement the band doubtless deserve, considering the hard work they’ve put in to just getting ‘The Pact’ recorded. “Doing our debut studio recording has been the first major milestone,” muses KShevil. “That was something we had been working towards for a year and a half and spent many hours rehearsing and refining in preparation for entering the studio. So that felt like a huge achievement once we had reached that milestone and walked out of the studio with the finished fully mixed/mastered recording.”

‘The Pact’ is a four-track album that has just been released digitally via Bandcamp and, as for physical releases, the official word is “watch this space!” The future looks bright (or dark, considering your take) for Lucifer’s Chalice and only time will tell what’s next for the four-piece.