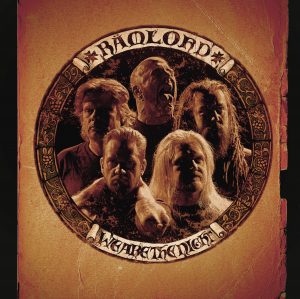 Hi Jarno please give us a brief history of the band… what instigated the initial idea to form Rämlord?
“After I left Impaled Nazarene I started to warm-up an idea about a old school metal band. I have been listening to that stuff since I was kid, but never really played in a heavy metal/hard rock band. I really wanted to finally play the music I love the most and Rämlord was born out of that idea.
I joined forces with my old partner-in-crime, drummer Janne Mannonen, with whom I played in a rock band in late-’90s. After that I called my old friend, bassist Niko Karppinen [Sentenced session-member amongst other bands] to join and he agreed. I have known this guy over 30 years, but never played in a same band. The band started to take its form in late 2010, and got stronger in the beginning of 2011 when Tommi Kanerva took over the guitar. Our singer Mikko Ojala (ex-MMD), we found through a mutual friend.”

Your excellent latest EP ‘We Are The Night’ has been out a little while now please tell the readers what they can expect from it in your own words.
“Well, you can expect everything from heavy metal and hard rock to black metal and even soft rock. Pretty much everything between Scorpions to Satyricon. There is no boundaries in this band when we write music. We don’t follow any rules or try to fit any genre. We do what we want and it’s great if people like it, but if they don’t, they can fuck off!”

Where was it recorded and why did you choose to record it there?
“The mini-LP and new 7” single were recorded at SMF-studios here in Helsinki. The owner, Sampsa Astala (ex-Lordi) is our friend and a really professional sound guy. Also the studio is professional, with really good equipment. What else do you need to record music except booze…
“We have been playing in different bands almost 30 years, and we know a lot of people in the music business. So we got a another friend Mikko Karmila [who has worked with Nightwish, Children Of Bodom, Stratovarius…] to mix all our vinyl. Good sound guaranteed!”

You have a very varied sound so I presume your influences are quite diverse, what bands and music styles help shape and fuel the overall sound of Rämlord?
“There are five guys in this band with really different musical backgrounds, so our influences come from many different genres. I come from the black/death metal world. Our drummer, who writes a lot of our music, is a rock/pop guy. Our solo guitarist is a punk rocker and bass player’s a thrash dude. Our singer has been screaming in black metal bands but also sings country covers. This may sound really fucked up, and it really is, but it makes our sound unique. Somebody has said that Rämlord are the band where old guys play old-school metal and rock with modern additions. I guess that sums it up.”

There is some black metal influence but overall the sound of Rämlord is very different to that of your former band Impaled Nazarene, why did you leave IN and how soon did the idea for Rämlord come about?
“I didn’t have enough time to play in Impaled Nazarene anymore. You know, work, children and life generally made it impossible to continue with them. I didn’t want quit playing totally, so I formed Rämlord. With this band we have more flexible rehearsing timetables and we don’t play live that much, so I can handle it. I also wanted to write different kind of music, which wouldn’t have suited for Impaled.”

What subjects do the lyrics deal with?
“I don’t write lyrics myself, so I let our singer to answer to this one: ‘I write a lot of anti-religious lyrics and stories about occult ritual murderers, mainly due to personal interest. And of course, because metal music is based on exaggeration. I am an atheist, and that is why I feel that all religions are the greatest evil in the world, and we have to criticise them in every possible way. As it has been said, world peace is only obtained after the last priest of the world is hanged by intestines of the last general’.”

You also have a 7″ recently released, tell us about this.
“It’s already been out since December and is almost sold out. On side one there is traditional Russian folk song called ‘Matuska’, sung in Russian language. None of us speaks Russian, but we didn’t want to do it in English. You may ask why, propably because we are fucked-up people and always want to do everything the hardest way. We got Olga Pugacheva, who is a Russian singer, to teach our singer how to pronounce the lyrics and he nailed it. There is also Mitja Harvilahti from Moonsorrow playing theremin on that track, which makes it even more bizarre sounding. On side two there is track called ‘Served Cold’. It’s an old school metal song, which was recorded a couple years ago, but hasn’t been released before. There is some Mercyful Fate and Ghost influences on that one.”

Are you an active live band? What can people expect from a Rämlord live show?
“No we are not. We have only played a few gigs in Helsinki area. But if you manage to see us playing live, I promise you will not be disapointed. Together the five of us have experience of 2000 gigs, so I guess we know what we are doing… at least I seriously hope so.”

Why this band name? What is the meaning behind it?
“Two of my friends were forming a band called Ramlord back in 1990 and I was asked to join. I was about to join Belial and passed on the offer. I don’t know why, but eventually they never got on with the name. It stuck in my head and 20 years later Rämlord was finally born. We added the dots over the A after we found out there is another Ramlord in USA. Personally to me Rämlord means literally Satan, and I see Rämlord as an occultic band. To me it’s natural continuum after Belial and Impaled Nazarene. The music might be different, but there is still the same black flame in it.”

Do you have new material written already? What’s the next for the band?
“We are currently writing material for the first full-length album. Hopefully we will record it by the end of the year. We have already a couple of songs quite ready.”

Finland has a rich history of producing dark but eclectic sounding bands such as Babylon Whores, Sentenced, Amorphis etc, why do you think this is? Any current Finnish bands you recommend to the readers?
“I know it’s cliche, but when you live in Finland and it’s dark and cold most of the year so you don’t want to make happy music and sing about the sun and flowers. Traditional Finnish folk music is very melancholic, so I guess dark music is naturally inside of us. It seems that most of the records I buy nowadays are from the ’80s, but Ranger is worth checking out. Old school speed metal at it’s best.”