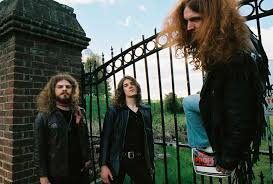 Anyone who’s heard the Satyrs’ howling retro fuzz rock or seen photos of Burgess stalking the graveyards of his Virginia hometown in black flares and battle vest might not be surprised to learn that our man prefers the pre-cell phone, pre-Internet, pre-mp3 good ol’ days, when land lines, the local library and physical formats were the natural world order. “I do buy a lot of CDs – as well as vinyl, of course – but I got tired of bringing them everywhere I went because I’m a bit OCD about it,” he explains. “I can’t leave the house without 100 CDs, because I’m always afraid I’m going to have every record except the one that I really want to listen to on an airplane or something. It’s funny – a couple of months back when we were at the airport with Wizard, Liz picked up my bag and was like, ‘What the fuck is in here? You need an iPod!’ If Liz Buckingham of all people tells you to get an iPod, you’re really behind the times. So I’m gonna try it out.”

Of course, when Burgess says “Wizard” he means Electric Wizard. He’s been playing bass for them since last year, even pulling double duty when Satan’s Satyrs supported Wizard on a recent US tour. If Burgess’ Wizardly adventures have influenced Satan’s Satyrs at all, the effect hasn’t been musical so much as aspirational. “I feel in some ways playing with Wizard has seeped its way into our mindset,” he ventures. “Just being around this band that’s 20-plus years old and made it as far as Electric Wizard has, it’s inspirational to the three of us as a young band starting out. Someday we would like to be at that level. Just being around them, travelling with them, it gave us something to aspire to and I think that’s important as it gives us that drive and hunger for more.”

In the spirit of more, Satan’s Satyrs have just sawed off their third album, ‘Don’t Deliver Us’. With it, Burgess and his bandmates – guitarist Jarrett Nettnin and drummer Stephen Fairchild – have delivered their most potent and cohesive record yet. While the vast majority of record company press releases are loaded with shameless showbiz bullshit, the latest Satyrs’ bio talks about the band “recapturing the primitive thrust of rock n’ roll.” It’s a throwaway line coming from just about anyone else you’d care to name, but when you hear ‘Don’t Deliver Us,’ the claim rings remarkably true. “I have to take credit for that line,” Burgess laughs. “I think this record captures who we truly are. It’s fucking loud and raw. We stripped it down to make it more immediate and give you a jolt. When I listen to my favourite records, I still get that feeling when your heart starts picking up and you get goose bumps because it just hits you. That’s what we tried to do and if some people dig it that way, then that’s the ultimate accomplishment to me.”

While Burgess fully acknowledges the timeless cliché of insisting your latest record is your best, he’s telling no porkies where ‘Don’t Deliver Us’ is concerned. “To tell you the truth, I was unsure of ‘Die Screaming’ when it came out,” he says of the Satyrs’ last album. “It was a bit more of a thinking fan’s record, as much as you’re gonna think about our records. It wasn’t as immediate. I think the intent got lost somewhere along the way. But it’s weird because the last album becomes instantly irrelevant when you record a new one. We’ve improved so much in so many different ways on this record it’s like this is Satan’s Satyrs. This is how we’re supposed to sound. Forget about the last one.”

Burgess nicked the album’s title from the 1971 French film ‘Don’t Deliver Us From Evil’, which is loosely based upon New Zealand’s sensational Parker-Hulme murder case of 1954 – only with Satanic rituals, teenage lesbianism and self-immolation thrown in for maximum cinematic luridness. “It’s basically about these two young girls coming of age, and they get into some evil stuff,” he offers. “They’re best friends, they’re experimenting, flirting with the dark arts, stuff like that. I only saw it in the last year or so, but it’s a very good film. There’s a lot to sink your teeth into. These two girls, they delve into a world of sin that’s ‘evil,’ quote-unquote, and in a way I feel akin to that because I’ve always been on my own trip. Being the metalhead in high school, the kid in the leather jacket, it’s like, ‘Fuck the world. I don’t need anybody else’. It makes what you’re escaping into all the more powerful – the music, the attitude. It feels so real, especially at that age. In a small way that stayed with me through life and will probably never leave me. It weaved its way into the ethos of the band, where it’s like, ‘Take it or leave it, man. This is what we’re about’. I know it seems fucking god-awful to some people, but it’s one hundred percent us.”

News flash: Not everyone enjoys the Satyrs as much as we here at the Fist. Clayton’s voice, in particular, might just be what you’d call an acquired taste. If there’s a recurring theme in reviews of the Satyrs’ albums, it’s that the vocals are “madcap” or “whiny” or that they “take some getting used to”. “I read the bad reviews because I like to get angry,” Burgess replies affably. “But I’m just doing what I do, it’s how I sound. I’m not someone who’s like, ‘Oh, people don’t know what they’re talking about. I’m a genius!’ Because that’s not the case at all. In terms of my voice, I tried something new on the last album and I feel like I improved on it [with the new one]. I can see how it could be a major turnoff for some people because it’s so different from what people were used to… and I’m not Ronnie James Dio.”

As this story goes to press, Satan’s Satyrs are preparing to embark upon a short US tour with Pentagram. “To me, Pentagram is the ultimate band to open up for,” Burgess enthuses. “Everyone in the band loves and worships Pentagram. I’m just a bit more obsessive than most people I’ve met and I try not to babble on too much, but obviously the band has always been inspired by Pentagram.”

In fact, the last two songs on ‘Don’t Deliver Us’ (‘You-Know-Who’ and ‘Round The Bend’) take their titles directly from one particularly memorable line in the Pentagram classic ‘Review Your Choices’. “It will be obvious to some people, but the fact that they actually sound best in that order was totally unintentional,” Burgess explains. “When I look at how the track list reads, I think, ‘Fuck it. That’s a great coincidence.’ But it’s gonna be a sad thing when this tour is over because I’m running out of all-time favourite bands to open up for.”