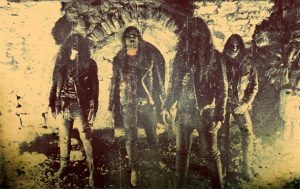 Your debut album is due to be unleashed in the near future – what can the readers expect from your first full-length offering?
Immense. Intense. In trance.

Where was the album recorded?
The album was recorded at Tonstudio Katzer in Nuremberg, Germany. Our new guitarist suggested Romin Katzer because he did an internship at his old studio once. Since we hadn’t made up our mind on where to record the album, we visited Romin at his new studio, which is close by where we live and instantly knew that we wanted to work with him. At first we only booked one week with the focus on getting the drum tracks recorded and ended up doing the whole record with him. It was very interesting to work with an engineer who hadn’t had any experience with metal before.

The production is very powerful, what did you want to achieve with the sound on the new album?
We wanted a very organic and natural sound that is still powerful and massive without being overproduced. Beside the incredible engineering job, the sound of the band had a lot to do with the outcome of the record. After we had written all the material, we spent almost a year on the preproduction and were well prepared once we entered the studio. That gave us the chance to mainly focus on the sound of the album.

What formats will it be available on? How did the deal with Sepulchral Voice initially come about?
It’s available on vinyl, CD and as digital download. Since the Excoriate [their old band] album was released on Sepulchral Voice Records, the people behind it have been close friends from the very beginning and it has been clear from the start that Venenum would be on their roster as well.

What inspired the album title ‘Trance Of Death’ and cover art concept?
We already had that title when we finished our mini album [2011] and it has always been clear that it was going to be the title for our first album. It has everything a title needs in our opinion and represents our music and vision perfectly. It was quite difficult to find the right artist or artwork for the album but Timo Ketola’s work is the perfect reflection of the music and lyrics and leaves a lot of room for interpretation, which is an important aspect to us.

What subjects made you want to put pen to paper lyrically for the new opus?
We had a rough lyrical concept for the album or title track early on but the lyrics were the last thing that were written. The music was so strong for us that we had a hard time putting the atmosphere into words. The lyrics are our personal interpretation of the music. The title track deals with death as a journey and a transition of body and mind.

In your opinion  what are the significant differences in the material on the album compared to the EP?
We have evolved a lot as a band and individuals over the years and expanded our musical horizon, so this album is much more diverse and dynamic. Despite the fact that there is such a long time span between the two records, the essence of the band is still the same.

Do you feel like there has been much of a progression and evolution in terms of songwriting?
Yes, we have learned and progressed a lot in the past six years and we put a lot of time and effort into this album.

There is some very interesting song structures and twists and turns with quite a few riff and tempo changes throughout, do you think it’s important to keep the music changing?
It’s not about changing tempo, having a lot of riffs or showing off with your instrument. For me music is all about atmosphere and emotion, something that gives you goosebumps. Sure, we are taking a much more complex approach to it but that’s just what comes out naturally. As long as you stay natural and authentic, you can do everything, there are no limits.

What helped to fuel and shape the bands overall sound?
We have all been fascinated with music from a very early age on and have been driven by our passion for it ever since. The sound of the band is a representation of the individuals and their chemistry in the band.

What is your opinion on the current death metal scene? Any bands out there that you feel a particular affinity with?
I am not very up to date with the current scene. There is so much coming out and it’s hard to keep track and pick out the few good things amongst all the redundant stuff that’s out there.

Why this band name?
Venenum is Latin and stands for poison or potion. All the different aspects of the band, the music, the lyrics and the visuals are the ingredients that make up this poisonous mixture and our passion is what brings it to the boil. Whatever steams out of this toxic bowl is the atmosphere we create with our music.

How active are Venenum as a live entity?
We are going on a small European tour together with Reveal from Sweden in April and have some festivals planned in the summer. After a long absence from the stage we are very eager to finally play again.