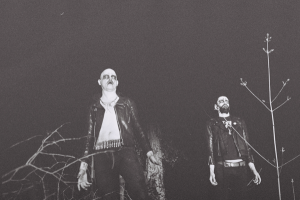 “‘Merciless Hammer’ was our first attempt at writing a d-beat song. Most of the album comes in at a much slower pace. None of us were ever into d-beat punk bands but we are all big Motörhead fans, so when Torm [drums, brother of Hord] came up with the main riff we decided to write a whole song in that punk style. It just felt right. It gave some sort of primal satisfaction. I had the title in my head for a while and wanted it to be primitive and brutal. Occvlta is evil in every aspect, but this comes more from a personal sense of evil. I do not write about Satan nor the occult because we want to be honest about where we come from. Torm only writes evil riffs, no fillers.

“We started working on what was supposed to become our debut album in 2012/13. We rented a hut in the forest and moved our studio there to record it, but in the end we didn’t keep a single song from that time. Torm and I discovered we were both looking for something else. On ‘We Command The Wolves’, Urgh [guitars, also brother of Hord] had written most of the songs but he left the band before we even played our first show, so then we lost our navigator. We felt we had to rethink and come to terms with what Occvlta was supposed to sound like in the future. Having lots of life stuff on and living in different cities didn’t help either. We had a lot of discussions about what we should sound like but never really had the time to work on new stuff, which killed our dynamic as a duo for a while. Then, one day Cauchemar played Berlin, and we spontaneously jammed with Andres and something just clicked. From then on we started playing with other drummers in Berlin and wrote song after song. It still took two years to write the album though!

“In the autumn of 2016 Torm started to record the album by himself in our rehearsal room in Braunschweig. The idea was to achieve a sound as minimal and close to our stage sound as possible but make it darker and more ominous. It is NOT recorded analogue and track by track. We rehearse too rarely and are not tight enough to record live so we just built it up by ourselves over several weeks. We recorded in an authentic digital, kind of family DIY style because it felt more natural then recording analogue, which would have been a lot more complicated and time consuming.

“Torm has written all the music and I the lyrics. The only song we did not write is the main riff of ‘Eternal Bitterness’. This was written by Urgh and he gave it to us after he left the band. All I did was re-arrange the lyrics. Rott and Aas play guitar and bass on the album, and it was mixed by our friend Tom Swine of Salute/Hateful Abandon. We wanted to do it ourselves, but it was missing something essential. Then out of the blue, Tom offered to help and boom! We had it! He is one of the few people we trust when it comes to musical taste combined with mixing skills. 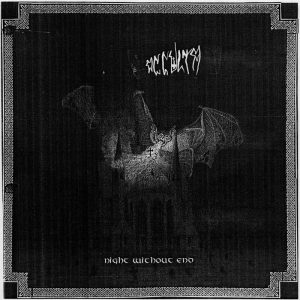 “The artwork features a black and white image of a giant bat spitting fire at an old church. It was drawn by Sebastian Rusten, from Norway, who has also drawn covers for Haust, Okkultokrati and Dark Times. I knew I wanted him to do it from very early on. I think the artwork was finished even before the first song was written. The photos of Torm and I are by Chris Shonting from New York who we became friends with on a US tour we did with Natur a few years back. Chris was in Berlin for a few days last year and I asked him to bring some old film and a fitting camera. I wanted to have the dirt of the city present in those pictures, to reflect the punk vibe in our songs. It was shot in a street around the corner from where I live. No snow or grand trees like the stereotypical black metal vibe, just pure grit. 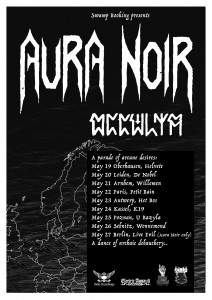