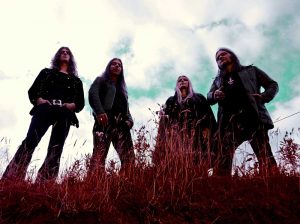 Evolving with every release, ELECTRIC WIZARD have created another mind-scrambling epic in the guise of ninth opus ‘Wizard Bloody Wizard’. JIM MARTIN talks to frontman JUS OBORN about its creation, celebrating the roots of heavy metal, taking control of his musical destiny and the quest for the ultimate rock ‘n‘ roll excess for Iron Fist issue 20

January 16th, 2018 marks the fiftieth anniversary of Blue Cheer’s ‘Vincebus Eruptum’, arguably the first bona fide heavy metal album of ‘em all. Moreover, somewhere in the subconscious of every metalhead – amidst the destroyed braincells and reckless pandemonium they’ve experienced in the last half-century, lurks a certain sense of this genre’s own big bang – that period from 1968 to 1973 wherein the ‘60s bled into the ‘70s, the idealistic dreams of the hippy generation began to curdle amidst violence and bloodshed from Vietnam, Altamont and the Manson family alike, and horror both real-life and imagined began to influence a feverish lurch into overdrive and dementia – reaching its apotheosis naturally with the first Black Sabbath album in 1970, amidst psychic shockwaves which still resonate well into the next century.

“I don’t think there was very much of a template for what heavy music was, but it seemed like people gravitated towards that sound – they wanted to hear tight syncopation between the bass and drums, they wanted to hear fuzzy guitars, they wanted to hear screaming vocals,” reckons Jus Oborn of Electric Wizard, who has spent over half that period as one of the most fearsome advocates and exponents of exactly these kind of heavy vibes. “I think it was very natural, it wasn’t forced at all. There weren’t many people to copy as such, So it was a very pure moment, and everyone sounds different, everyone sounds original.” 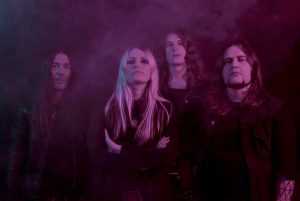 Such talk is particularly relevant in the wake of this West-country-based institution’s recently released ninth album ‘Wizard Bloody Wizard’, which marks his and the band’s most concerted effort to connect with this particular motherlode of heavy metal. Whereas the early Wizard days and their attendant recorded work may have been marked by a notable death-drive into oblivion via fuzzed-out nihilism, pitch-black malevolence and unflinching in-your-face horror, their newest effort is their most stripped-down and pure evocation of the original headspace that begat their style.

Indelible and insidious songs like the bludgeoning boogie of ‘See You In Hell’, the grimly catchy ‘Necromania’ and the strident death-waltz of ‘Hear The Sirens Scream’ uncannily summon the above era as well as hitting home with panache and power, blithely unconcerned by contemporary obsessions with boutique amplification, slow-for-slow’s sake tempos or subsonic down-tuning, yet all the more powerful for their naked. bloody-minded savagery. Never a band to pay attention to the wider musical world around them, this new salvo marks a still more stubborn and memorably maverick turn down Wizard’s ever-crooked path.

“I feel like doom grew away from us,” Jus clarifies. “We haven’t changed, but the world keeps moving around and changing and developing, and I guess we’ve been left behind somewhere. I mean a heavy band should be about the music – I remember a few times in the past in this band where we played, we rented the rehearsal room, we got the 50 watt combos, we were rehearsing, and then someone’s coming in telling us to turn down – and we’re playing pure shit 50 watt combos! Why the fuck do we have to turn down? Then I realise it’s the music – there’s something about creating resonation, creating good music and heavy music that’s beyond amplification and beyond sound. You can play it clean, you can play it on an acoustic guitar, it would still have that effect on people.

“It’s all a game isn’t it,” he continues with a laugh. “You can downtune as much as you like but it’s only really going to matter when you’re playing the lowest note, cos as soon as you go up to here,” he gestures around an imaginary seventh fret, “you’re playing in E again, what’s the fucking difference? You can do it, but there’s no longevity to it. I think turn your amp up to full blast, everyone’s up there, strum open E, wow, that’s heavy. What are you going to do next then? There’s nothing left.