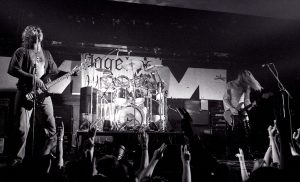 Recording in bedrooms and underneath grocery stores, ANGEL WITCH leader KEVIN HEYBOURNE recalls the creation of what has been released on vinyl as the ‘Seventies Tapes’. In this abridged version of the feature from issue 21, IRON FIST’s KEVIN STEWART is all ears.

Original member, guitarist/vocalist Kevin Heybourne has guided Angel Witch through disbandings and hiatuses, continuing on to this day, emerging as popular as ever with underground bangers. With that popularity comes a further thirst for both new material and gems from the past. 2012’s ‘As Above, So Below’ album satisfied the former, while the recent issuing of ‘Seventies Tapes’ – originally digitally via Bandcamp last year followed by a more recent vinyl release – satiates the latter. As the title hints, it’s a collection of recordings from a specific era. What makes it special is that the content hails from various sources chronicling the band’s woodshopping and demonstrates the dedication required in the days before ProTools and home recording rigs. Iron Fist caught up with Kevin to discuss moving forward, giving back and why parents should never throw away their kid’s stuff.

What was the impetus for the release of the demo material?

“They have been released in one form or another in the past. There was a release called ‘Sinister History’ on a couple of small labels about 15 years back, and they also got added to the official 30th anniversary edition of the debut album back in 2010. We just thought that, at some point, we should do something ourselves with them rather than handing them over to other people all the time. Then, when I was back at my parents’ house a couple of years back, I found the tapes!”

In what condition were the original tapes and how much studio magic was needed in order to make them playable and worthy of reproduction and sale?

“They were just cassettes, not reels, or whatever, sitting in a box at my folks’ place. The versions which had been digitised in the early 2000’s sounded like shit. You know, straight-into-the-PC sort of thing through some “mastering” plug-in. There was a lot of that stuff happening in those days; a lot of low quality audio from home mastering getting released by everyone. We all thought it sounded okay at the time, but you look back and it’s like “fucking hell!” It makes you cringe. Things have changed in terms of what you can do to make old tapes sound better. So, we just gave them to a mastering guy we know and he made them sound pretty good actually! I don’t think there was any real “magic” or audio restoration which needed to happen. It wasn’t like we had to bake old master tapes or anything. Once the mastering job was done, we were just sitting on some WAV files with an idea that we’d do something with them at some point, but [we had] no real plan.”

At what stage of the development were you at when these were recorded? By that I mean, how close do you remember being what you heard in your head as Angel Witch and the reality of the situation and how the band sounded?

“We were still very much in the development stage as a band. It was pretty raw and pretty wild, sometimes in a good way, but sometimes it was a mess! In my head, I wanted it to sound as good as all the original masters I was influenced by, certainly in terms of proficiency. But I did like the fact that we were faster, rougher and younger I suppose? I didn’t want it to become all slick, you know? But I think that we all knew the demos were just sketches of how those tracks should end up sounding and that we hadn’t got there yet. As it turned out, our debut album did end up being a lot more polished and I do think it sanitised our sound a little too much. We lost that power trio vibe, especially with the drums. Looking back, I feel [original drummer] Dave [Hogg] was over-reaching in a lot of his playing on these early tapes, but you could hear the ideas he was trying to get across in his fills and licks. Maybe they weren’t hitting the mark, but there was a vibe. When we did the album, the producer’s cure for that was to just make him play everything straight and take all the tricky bits out. Looking back, I think, if he had worked on the drums longer and let Dave put more of himself into the parts, we would have had a heavier base to work on with the rest of the music. Of course, that would have eaten into the time we had to spend tracking a 100 fucking vocal and guitar harmonies – which we’d never be able to replicate live – but that would have been just fine with me! And fine with the other guys in the band, as well! We’ve fallen in and out with each other over the years, but I think I can say – hand on heart – we all agree on this one point. There probably a few more, actually, but we’ll cross that bridge when we come to it.”

When you initially listened back, what did you hear and what memories were spurred by the sounds and songs?

“It’s a mixture of emotions. Obviously, the songs and playing became so much more refined as time went on, so there is an element of horror in hearing all the mistakes. But we were really young and were blasting loud amp set-ups in the middle of people’s fucking houses trying to record this stuff. It was exciting. It felt like the start of something.”

Proceeds from the initial release of ‘Seventies Tapes’ were donated to victims of last June’s Grenfell Tower fire. Was there a particular personal connection to that incident?

“Well, like I said, we had these mastered WAV files sitting there doing nothing and we just woke up to the news and thought we should help. It’s not like Grenfell was part of our local community, but myself and Will [Palmer, bass] are both Londoners and Jimmy [Martin, rhythm guitar] has lived here for 18 years. It just felt so close and was so horrific. Also, we’d been discussing the social housing situation in the UK quite a lot when we were on the road and stuff, and how a really bad situation was developing. The amount of times we had sat there and predicted this exact event, and when we saw those flames it was like, “well, there you go.” It’s just so predictable and so avoidable and taking place in the richest borough in London, which is one of the richest cities in the world. As it happens, on the day, we just did it very quickly and weren’t thinking too much. We had already registered the band name with Bandcamp, just in case we ever needed it, and it took Will about half an hour to upload the files, write a bit of blurb and chuck the Baphomet into some quick form of cover and it was out all over our social networking and everything. We raised over £2000 in a pretty short time and split it between the Red Cross appeal and various local community centres where people were having to live after they lost their homes. Also, for any digital downloads of this release from our Bandcamp page, we’re still paying the money though to Grenfell charities, that’ll carry on for some time to come.”