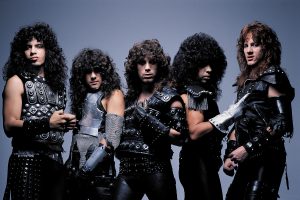 If one band neatly sum up the quandary and identity crises that traditional metal endured as the ‘80s wore on, it would have to be Armored Saint. The credentials of their debut, 1984’s ‘March Of The Saint’ scarcely need calling into question. Hell, not only does said platter boast a sleeve effectively portraying the band’s members as knights in shining armour in front a mighty castle on the hill, but the band even had the common decency to make a video for its lead track ‘Can U Deliver’ that depicted them as motorbike-riding future warriors pulling a sword beamed down from the heavens from a rock, Excalibur-style. Yet perhaps more importantly, the contents stand proud 30 plus years on as a mighty testimony to the power of unpretentious and gritty metal action. Yet, as the decade wore on, the Californian troupe began to feel increasingly like a band out of time.

Armored Saint had risen from the LA club scene in 1982, despite feeling very much like outsiders even then. “Our whole thing, at the point where we were coming out, (was) we just wanted to be like Iron Maiden, Saxon or Motörhead, you know,” notes softly-spoken bassist Joey Vera. “The first time we played The Troubadour, a pretty world-famous club in Hollywood, it was like a dinner venue where you’d have tables and chairs. We had a large following of friends who would come see us, about 20 or 25 people – all guys of course – and then when we were about to play they all came to the front and moved all the tables and chairs out of the way and formed a pit. And the club was fuckin’ pissed! We were the first band to do that. So, that was our vibe in the beginning. We’re not from Hollywood. We’re from Pasadena. We’re into New Wave Of British Heavy Metal, and we don’t give a fuck about Hollywood. But Hollywood was the place where the media went, and the place where a lot of people went to see shows, so we eventually had to start playing there. We feel like we went in there and conquered the place.”

Vocalist John Bush – who indeed has quietly remained one of the greatest metal bawlers on earth now for all three of these decades – is, these days, most likely now a little tired of being asked whether he regrets turning down the job of vocalist in Metallica, and therefore Iron Fist doesn’t see fit to bring this up. (“People always ask me if I have any regrets,” he notes obliquely and unprompted at one point. “And really I have none, because I’m really content with the way my career has gone”). Yet as he testifies, even after the band was signed to Chrysalis, Armored Saint’s pathway to metal glory was far from trouble-free.

“Armored Saint were always this strange kind of band where even in the ’80s when there were two big genres of music happening in hard rock and heavy metal, we never really were with one of them,” he notes, summing up a factor which invariably sounds itself hulking and grey as the elephant in this band’s particular room. “We were never part of the thrash movement, we were never part of the hair band movement, we’ve always kind of been our own thing. At times it was frustrating, it was well, we can’t really ride any bandwagons here, but we’re not really that different from either one that much”

Both Bush and Vera point to 1987’s third album ‘Raising Fear’ as the pinnacle of their early identity crisis. “I don’t know what I was thinking,” laughs Bush.  “That whole record I sang so high, I felt like I was killing myself.” Yet following both a shift of labels and the loss of guitarist Dave Pritchard to cancer, the last record of their earliest incarnation, 1991’s ‘Symbol Of Salvation’ – something of a figurative rise from the ashes that included Pritchard’s songwriting and even guitar work – seemed the first time the band had felt entirely comfortable in its own skin. “That was a huge breakthrough for us, making that record and making those songs,” notes Vera. “We weren’t worried about ‘Oh no, we’ve got to fit in with thrashers’, but also we wanted to do our own thing. We grew up listening to Aerosmith, we had this American vibe to us too, we wanted to just write what we wanted to write. The whole European power metal thing was much more classically based, and we had some of that in us, but not a lot, so with the blues-based thing people didn’t know what to make of us in a way. Like people would hear a song like ‘Over The Edge’ or a song like ‘Truth Always Hurts’ and would be like ‘What is it?’ I don’t get it’.”

Bush soon found himself unable to turn down another shot at glory, and joined Anthrax in 1992, his mighty pipes playing a considerable role in 1993’s ‘The Sound Of White Noise’ being quite the hit, before that band too fell prey to shifts in fashion and record company indifference. When Armored Saint reconvened, setting out again on a mission which has led to their best received – and indeed best charting – album in nearly a quarter of a century in this year’s mighty and bravado-driven ‘Win Hands Down’, it was without any of the compromises or travails they had to deal with in their early days.

“John said to me ‘Let’s pretend like we’re the biggest band in the world, like U2 and we can do anything we want, ‘cos we’re going to sell a million records anyway’,” laughs Vera. “It was a funny comment, but he basically meant let’s not be afraid to take chances on this record, and that was our credo. You know what? We want to have fuckin’ sitar on this part of the record, and we want to have John sing with a piano, we want to have John sing a duet with a female singer [Scott Ian’s wife, Pearl Aday]. Even that just came across like we had a lot of confidence; we’re going to go out there and do this.”

“There was this kind of opening of the gate where we want to feel like we don’t really have any limitations, and then if anything ever comes out sounding inappropriate for us, we’ll be honest about that, we’ll tell ourselves that,” notes Bush. “After all, we’re not making the Armored Saint trip-hop-nu-thrash record!”

In a sense Armored Saint remain quite the paradox for metal nerds around the globe, and this must be something to be celebrated. Remember, this band failed to fit in with thrash metal in the ‘80s, and then Bush became associated with no less than half its so-called big four. And despite their lack of truck with hair metal, Jeff Duncan, their guitarist since 1990, cut his teeth in the LA spandex horrorshow Odin, immortalised in the legendary documentary Decline Of Western Civilization Part II – The Metal Years. “He will never live that down,” smiles Vera. “He’s going to live with that for the rest of his life. He doesn’t speak much in the movie, so that’s in his favour. It was an innocent time I guess, and it was a crazy time. “It’s hard to knock it” he reflects sagely. “I think a lot of people wish they were there, in that hot tub.” 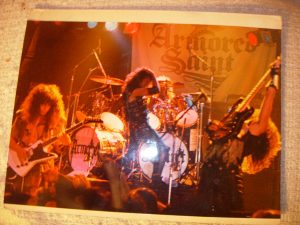