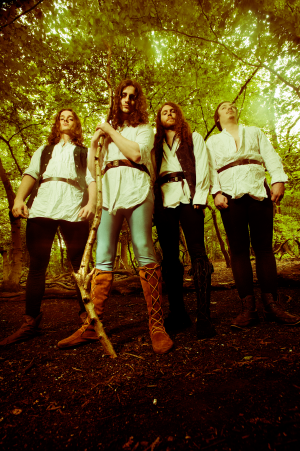 It’s midday on the third day of a festival. Most of the attendees are still stewing in their tents, regretting that last case of Koppaberg, but a few fans have dragged themselves out of bed and are heading to church. Church? At a music festival?It could only be the work of the UK’s own heavy metal minstrels, Wytch Hazel.“I messaged Jacob [Hector, Muskerock’s promoter] to say we’ve got this album coming out and would you fancy putting us on? He said ‘I’m not sure, I might have a slot’ and then the guy from our label sent him the album and he was like ‘Oh, I really love it, I want you to do two gigs. I want you to fill the shoes of Ashbury and do the gig in the church.”If you know Wytch Hazel you’ll know two things. They love Ashbury – just listen to their debut full-length ‘Prelude’ for proof – and that Colin Hendra, Wytch Hazel founder and lyricist is a committed Christian who isn’t afraid to fl in the face of confrontation and put his faith at the centre of his compositions. This was a dream offer.“I messaged the guy at the church, he said he wanted it to be part of their liturgy, and because a lot of the songs on the album are biblically-based, I said to feel free to use those readings. Our firs song was ‘Surrender’, which was like surrendering to God, so he was incorporating that.”This is not the usual subject matter for Iron Fist, but it’s refreshing. Wytch Hazel are a breath of fresh air for the UK heavy metal community.

They formed in 2011 and quickly caught the attention of the then-burgeoning underground scene with their accurately NWOBHM-looking single ‘Surrender’. Go-to traditional metal stable High Roller picked them up for a split with Detroit’s Borrowed Time a year later and quickly followed it with a collection of their demos and singles to date. Touring and line-up changes followed, as is the rite for most young bands, and in April this year they released their firs full-length on Bad Omen Records. Dressed like medieval peasants and playing a distinctly lilting, progressive, harmonious strain of classic heavy metal Wytch Hazel stand out for the best of reasons. Their lyrics are just one small part of their appeal. And Colin believes he stands shoulder to shoulder with the likes of Behemoth and Watain both in rebellion and belief.“When I started the band it was really an undertone,” he says of the religious aspect to the songs he writes. “At first people didnt realise that there was a Christian in the band, because if you listen to songs like ‘Surrender’ you don’t immediately think that. So when the EP came out people were like, ‘Oh, there’s this white metal band’, and I was thinking ‘Oh no, here we go’, but mum brought me up on soft rock, but listening to Iron Maiden, there was distinctly an era there. It sounded old, very different, quite heavy but still listenable. People had shown me Slipknot but it was over the top, and this guy leant me Iron Maiden and it was heavy, melodic, so much to listen to. It got me and it was probably around that time that I started to play guitar. Not long after I started a band, we got a small following and then because you like Iron Maiden you end up finding other bands who also d, and we discovered Eliminator from Lancaster. A guy from Eliminator showed me the more obscure side of the things. By that point I was already listening to Judas Priest and Saxon,but he said ‘What about Witchfinder General Dark Star, Virtue?’ and we went in deep. We covered the whole spectrum from early Priest right up to W.A.S.P.”Colin went on to play drums for Eliminator, who have fast become another of Iron Fist’s favourite young British heavy metal bands. It just goes to show what a family is growing here in the UK, especially of those in their 20s, who like Colin turned their back on the ‘90s nu-metal dirge to find comfort in the organic early heavy metal sound. Wytch Hazel and their peers are keeping old school heavy metal alive and in the process unearthing bands that would otherwise be left in the dark ages, like Ashbury and Virtue.

“When I was in university I was always trying to get into the most obscure thing I could find” he agrees, recalling their Virtue-ous take on their first singles artwork. “But I don’t do that as much now. Some people are just so militant, they just know so much stuff and I’m just not like that at all. I know more about the ‘70s bands now, I went backwards a little bit.”We can tell, their new album is stuffed with hard rock flair and bluesy heat and it’s opened them up to a whole new audience. The band will be touring as soon as they can and in the meantime are invited back to the family hearth, when they play Live Evil Festival in London again.“That community is great really,” Colin gushes of the invite to return to The Dome in October. “The moment we met the Live Evil and the Amulet guys we knew we’d get along. I heard someone say recently that heavy metal is a synonym for freedom and that’s a really god way of putting it. When we ended up mates with Ascalon from Preston, or we ended up mates with Seven Sisters, you found that everyone has the same laid-back views and you just have so much in common, not just the music but the guys are all really sound. So, it’s nice when they say they liked your new album because if they say they like your music you’re doing something right.”