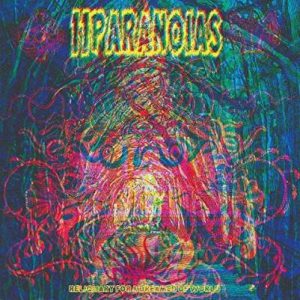 Ever since a Swiss scientist wondered what what happen if he ate this chemical compound he was working on back in 1943, musicians have been imbibing Lyserg-säure-diäthylamid and recording its effects sonically to tape. 11 Paranoias don’t write pretty songs about pretty colours though. ‘Reliquary For A Dreamed Of World’ is the sound of the fear.

Forming, ominously, on 11/11/11, Adam Richardson of Ramesses and Mike Vest of Bong, two equally damning perpetrators of doped-up and dread-inspiring doom, have cooked up seven sprawling, stomach churning trips on their third album. Each crashing note and howling utterance is a horrific reminder of the darkness that shrouds us all. This is not an album for bedtime, even less a sober Sunday morning, as your serotonin receptors are dragged through thick molasses.

Great restraint is show by new drummer Nathan Perrier, last seen smashing and bashing with speed metal merchants Satan’s Wrath. Here he is the rhythmic voodoo doctor that keeps you grounded while Vest and Richardson poison your mind with noise rock abandon that hits the sweet spot on all five senses we know and even the ones we don’t. There are moments of groove on ‘Destroying Eyes’ and the Fudge Tunnel-esque ‘Milk Of Amnesia’ that hint at the joy life can bring, but they don’t stick around for long.