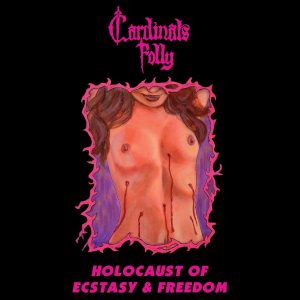 On album number three, Cardinals Folly formed in 2007 from the ashes of short-lived band The Coven, who released a few EPs between 2004 and their demise. Sticking with occult themes, Cardinals Folly offered the self-released ‘Heretics Hangover’ EP in 2008 and have been making a name for themselves in trad doom circles since. ‘Holocaust Of Ecstasy And Freedom’ is a mighty continuation of their faithless sermons with lumbering, monolithic riffs pulsating beneath Mikko Kääriäinen’s Dorrian-esque requiems of death, horror and witchcraft.

Much like their heroes in Cathedral (although expect none of Gaz Jenning’s mastery, Juho Kilpelä’s guitars are simple and restrained, hidden beneath Kääriäinen’s driving bass and Joni Takkunen’s pounding drums) the lyrical themes of Cardinals Folly are based on cult b-movies, the type found on VHS, at a carboot sale, sold by a man you wouldn’t trust your kids with. There is a theme here that returns often to Beryl Reid gem ‘Psychomania’, a 1973 lost classic that sees Nicky Henson star as a teenage misfit obsessed with the dead. Obsession with death is a foundation that doom built its castle on, and these Finns are proudly carrying that orthodox tradition with them until they too shuffle off this mortal coil.
May their bike’s engines never rust, their poisons never fail and their neighbours live in fear.

THANK YOU SHADOW KINGDOM FOR GIVING US THIS *EXCLUSIVE* SNEAK PREVIEW OF ‘PSYCHOMANIA’ – THE SONG INSPIRED BY THE FILM OF THE SAME NAME. EIGHT MINUTES OF HORROR-FILLED TERROR AND DOOM – ENJOY!