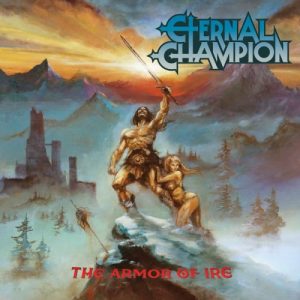 It will be no shock to those who know the tastes of our editor, that Eternal Champion’s ‘Armor Of Ire’ has been on repeat. It’s a tick-box of heavy metal delights. But why? After much deliberation, it was decided that we would try and scientifically dissect why a debut album, of a band from Texas who don’t really seem like this is their main gig, have managed to get “potential album of year” accolades from everyone from Darkthrone overlord Fenriz to proper, real music journalists who have opinions that matter and are invited to vote on important things like the Polaris Music Prize and The Grammys. It’s because it’s real. And simple.

Eternal Champion aren’t trying to trip you up with obscure references to bands you don’t know, or do anything so out-there you fall over yourself to understand it. Their music doesn’t jar, it’s not dissonant, it’s not clever. It’s ‘Painkiller’-era Judas Priest to lyrics about Cthulu and Michael Moorcock characters. It also feels damn organic, like a bunch of headbanger pals finished a table-top RPG in record time, still had some beers left and decided to grab their guitars and jam a few songs in the vein of the bands they’ve painted on their jackets.

It’s 8-bit metal, there’s a bit of arcade game soundtrack hidden in there, a bit of funk bass and a lot of heavy metal glory. Lyrics tell you that “by spell or by steel, the brazen will fall” while effortlessly throwing out classic metal tropes like they’re going out of fashion. Wait, they were never in fashion. And that’s what Eternal Champion celebrates. They’re not trendy, they’re not dextrous guitar gods, frontman Justin Tarpey’s no Dio – although he could give Mark Shelton a run for his money – they’re just metal dorks who want to tell you it’s okay to not go outside, you’re a warrior and don’t let anyone tell you otherwise.