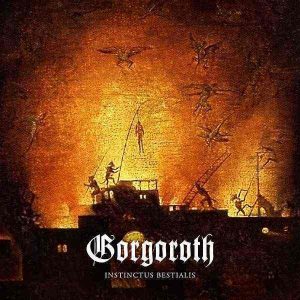 It’s been four years since that re-recorded version of ‘Under The Sign Of Hell’ caused a storm of negativity around the rather tarnished name that is Gorgoroth. After several line-up changes, a live show mocked for its desperation to be extreme and a lack of originality to live up to their earlier art, the Norwegians appear to have resurrected themselves with something actually worth giving a damn about – tenth album ‘Instinctus Bestialis’. With yet another new vocalist, this time in the form of Atterigner of Triumfall, the band add another dimension to their usual straight up black metal blitzkrieg with far more death metal influences than before, likely to attract a further fan base from those into Behemoth, Goatwhore and Belphegor.
Rarely does an album capture you with such a strong opener but ‘Radix Malorum’ is a perfect example of what to expect for the next half an hour as it bristles with blasting precision. Whilst drummer Asklund received a pounding (pun intended) for a poor drum sound on the aforementioned last release, his style is faultless on this album and although simple in some places, it’s enough to create an aura of impending doom, particularly on ‘Ad Omnipotens Aeterne Diabolus’.
Despite going through the wars in recent years, ‘Instinctus Bestialis’ concludes as strongly as it began and at only half an hour long, you may find yourself feeling genuinely irritated that it’s over and pressing the replay button for the onslaught to commence all over again.