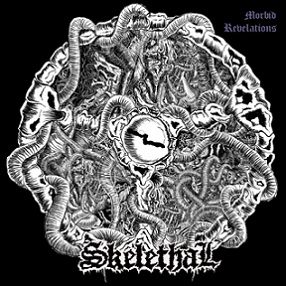 For the clean freak inside many of us, Skelethal have had the decency to clean up their compilation and despite only three years behind them have created a 17 track album filled with demos and EPs found in the basement. For those not previously familiar with the two-piece from France, their death metal sticks to the thrashier styles of old school Dismember and the other Swe-death elite and adopt the gritty production vibes alongside it. Last year’s EP ‘Death Manicvs Revelation’ is probably the best example of their compiled work, with ‘Macabre Oblivion’ particularly strong when showcasing the catchy chug this duo create. Pretty much every song the band have every recorded has been thrown onto ‘Morbid Revelations’, meaning some tracks even show up twice, such as ‘Putrefaction’ and ‘Death Returns’, which kind of summarises the fact that this band may have run out of ideas when it comes to writing such nostalgic tunes. Add a couple of covers including of Sepultura’s ‘Show Me The Wrath’ and this album feels a little unnecessary, unless your OCD is really getting the better of you.