SARCOFAGUS INTERVIEW: “WE’RE THE ANCIENT ONES. WE HAVE TO COME BACK TO SHOW THE YOUNGSTERS HOW IT’S DONE” 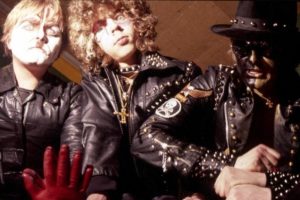 Indisputably one of the first ever heavy metal bands in Finland, if not the world, SARCOFAGUS and their leader KIMMO KUUSNIEMI were always pushing the limits of rock ‘n’ roll, even becoming one of the first metal bands to make a full-length music video. But after 30 years they’re back with a new album and tell IRON FIST how it pays respect to a legacy they thought was dead and buried.

Sarcofagus was laid to rest in 1982, when did you realise that there was an interest in the band again? Kimmo: “I think it was around 2000, because [legendary Finnish rock radio DJ] Klaus Flaming wanted to find the ‘Motorbirds’ film. That’s when I realised on the internet there was so many stories about Sarcofagus and that these albums had become cornerstones of Finnish metal. Of course back in the day, when I started to make films I never showed the ‘Motorbirds’ video to any places that I was looking for a job because I was embarrassed by it. And I was embarrassed by Sarcofagus for probably the whole of the ’80s. Metal was like a bastard, all the progressive bands thought it would die and it’s a joke, so in the … Read More