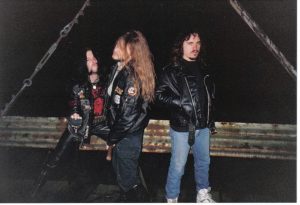 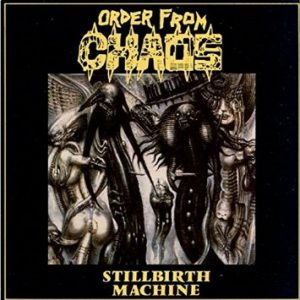 The United States is a big county. It is roughly 2,900 miles from Tampa, Florida to San Francisco, California and 3,000 miles from New York City to San Francisco (as a counterpoint, it is only 250 miles from Stockholm to Gothenburg, Sweden). Yes, other scenes existed in the US, Texas and the upper Midwest being prime examples, but considering the sheer concentration of bands (and labels) that called the East and West Coast home, with numbers further swollen by bands and individuals constantly relocating to be closer to the action, it is understandable that smaller scenes dotting the country were overlooked. This situation did not deter three disaffected Kansas City, Missouri teenagers from forming one of the most influential underground bands in extreme metal history, Order From Chaos.

“As I remember, it was a mutual friend that said ‘Order From Chaos’ in that order during the course of a conversation,” says guitarist Chuck Keller. “Pete [Helmkamp] seized on them, and we made it our name.”

“I came up with the name and concept,” states bassist/vocalist Pete. “We felt it was a proper representation of what we as a band were striving to achieve, both musically and lyrically. We wanted a name that would represent the band, but not place us into a category.”

As it turns out, Chuck, Pete, and drummer Mike Miller used their relative isolation to their advantage, which makes one think of what happened in 1982 in Switzerland with a naïve trio of miscreants who started out as Hammerhead before switching their moniker to Hellhammer.

“I suppose all bands are influenced by their surroundings,” says Chuck. “We were cut off from other metal scenes, and the only thing that passed for a scene here in Missouri involved cases of hairspray and funny nicknames that included words like ‘Foxx’ and ‘Roxx’. We were more partial to following bands with members who had nicknames like ‘Cronos’, ‘Angelripper’ and ‘Quorthon’.”

“I truly think that our isolation in Middle America gave us the opportunity to develop in our own way, without the parameters of a large organised scene that could have put limits on what it was we were doing,” adds Pete. “The small scene in Kansas City was a mix of metal and punk, and although not unified, certainly saw a lot of cross-pollination from one to the other. The influences that Chuck and I brought to the table were quite diverse as well, since there were no ‘rules’ on what or what not we ought to listen to.

“Both these factors allowed Order From Chaos to evolve in its own unique way. Of course, we were aware of other music, being involved in tape-trading both nationally and internationally, but the manner in which we constructed the music, lyrics and imagery of Order From Chaos was uniquely ours.”

“I have always created music that goes beyond any simple classification, Pete continues. “Order From Chaos was no exception. It is only after the fact that our name seems both fitting and a perfect representation of our endeavours, both musically and lyrically. Classifications will always exist, but it is often those bands that lie beyond them that truly make a mark.”

“Unique” might sound admittedly bland, but in Order From Chaos’s case it is wholly appropriate because nothing created or released at that time sounded remotely like their blistering, uncompromising debut, ‘Stillbirth Machine’. 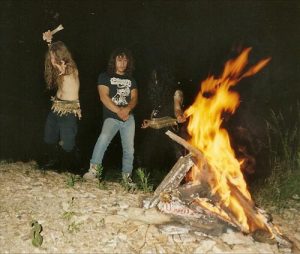 “The album created itself as much as we created it,” states Pete. “‘Stillbirth Machine’ had a mind of its own. I feel that we were able to capture the live fury and chaotic nature of the band quite well. The nature of the music, the nature of the recording process and the studio itself all combined forces to equal ‘Stillbirth Machine’: tape splices, overheating reel-to-reel machines, overindulgent engineers and overzealous band members were all unique factors to create a unique release.”

“I’m not sure how to classify what we did,” admits Chuck. “There were elements of both styles, obviously, but in our own time we weren’t considered that extreme since, in those days, extremity was as simple as having blastbeats and inverted crosses. We never had need of those gimmicks.”

This reaction is odd when you consider ‘Stillbirth Machine’s raw and loose feel, which lends it a decidedly electric, and therefore engaging, edge. Unlike the demos, they had an ample amount of studio time at the Sound Factory to hone their withering attack, although according to Chuck; “The Sound Factory would have been a step above Studio 7 had the equipment been kept in good nick and not needed constant mending, which reduced the ‘professional’ appeal of the place.”

“It was the first time we had any real amount of time and effort to devote to a recording,” states Pete. “Working there taught us a lot about recording. We were able to spend as much time as we wanted to achieve the desired results, and I think it shows. Not a lot of bands are presented with this opportunity, and I am thankful for that.”

“We had a classical recording method, as I remember,” says Chuck. “We recorded drums first, then bass, guitars, vocals, leads and effects. Then it was month’s worth of mixing and tweaking.”

When asked to describe ‘Stillbirth Machine’ in his own words Chuck offers, “I have to borrow a description from a friend; it sounds feral. What appeals to me is acknowledging its place in the Order From Chaos legacy, a stepping stone to [last album, 1998’s] ‘An Ending in Fire.’

“Beyond that, it holds songs and concepts that we would later expand upon, namely the ‘Stillbirth Machine’ to ‘Conqueror Of Fear’ odyssey and my exploration of scientific themes as a contrast. Strangely enough, in retrospect, it provides a sort of symbiotic aspect to our philosophical underpinnings.”

“Violent, savage and unrelenting,” is how Pete describes ‘Stillbirth Machine’. “It is a disturbing look into mankind, on both the microcosmic and macrocosmic level – that which both is and has the potential to be.

Considering ‘Stillbirth Machine’s considerable legacy, then, do the duo, who now play (or have played) in Revenge, Angelcorpse and Ares Kingdom, feel it stands up as well today as it did upon its release?

“I certainly think so,” says Pete. “When we wrote and recorded the material, we wanted to create an album that did not fit into any parameters, did not invoke specific lyrical themes and did not utilise common imagery. At the same time, we embraced the ferocity and savagery of what metal is and pushed that to the extreme. Those elements still stand true today.

“Early Order From Chaos lyrics often had quasi-political overtones, but we never considered ourselves a political band. An ultimate irony is that not only do the lyrics stand the test of time, but ‘Blood And Thunder’, ‘Power Elite’ and ‘Iconoclasm Conquest’ are eerie portents of the politics of the day that we are currently struggling with here in the United States.”

“It seems to,” adds Chuck. “But it’s hard for me to be objective since I consider myself responsible for what I believe are its production deficiencies.”

And what of Order From Chaos’s influence? For many years now extreme underground bands, especially those of the staunchly militant, blackened gas masked/goat horned legions have been name-dropping Order From Chaos, among others, as a direct influence. This, in grandest irony, is interesting when considering what Chuck mentioned earlier about Order From Chaos not being considered all “that extreme” for their time.

“Lyrically, musically, artistically and ideologically,” says Pete, however, without reservation. “The influence of Order From Chaos is not to be overlooked. It is an honour.

“‘Stillbirth Machine’ was our opportunity to show the world that three metalheads from Middle America had as much business as anyone else creating extreme music, and by that token we wanted to fashion our music as the very tip of that spearhead.”

A full, extended version of this interview was printed in Iron Fist #1