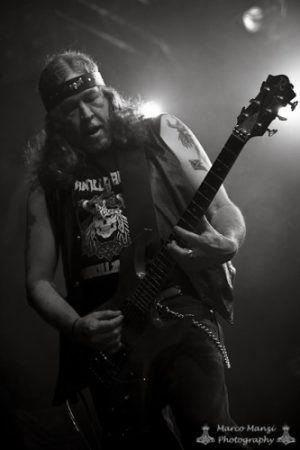 “I have most of the Heavy Load LP’s in my collection,” states Mark on his influences. That’s all well and good for any fan of Northern Warriors fighting Polar Bears in the mountains, but here we’re talking about Manilla Road’s evil twin; Hellwell. Mark has already led one of the most prestigious acts in underground heavy metal for over 30 years, so it may have come as a surprise that he has birthed an evil version of the ‘Road. Why? Or perhaps the question is, why now?

“It started out as a studio project but as time went on we decided the whole damn thing was really pretty cool, so we’ve made it more of a band thing now. The only issue we have is that Ernie [EC Hellwell] really doesn’t want to tour. We’ll work that out though if there is demand for the band live”.

That would be super cool. It took Manilla Road long enough to play overseas. The Road finally ventured to Europe this year as part of the Roadkill tour. This included two Scandinavian dates and a first ever appearance in the United Kingdom. Why did it take so long?

“I could joke around and say it was because Kerrang! called us ‘Satanic Dirge’ and the ugliest band in rock back in the day [laughs]. Very few of the mags liked us back then though. It has always surprised me that the very albums that they slammed are now considered our most classic and greatest releases. The music industry never fails to amaze me”.

Likewise with Sabbath and the legendary “Sounds like a pile of heavy metal crashing to the ground” reference, anyway shitty reviews aside, did they enjoy coming over?
“I was way excited,” Mark beams. “A lot of my family heritage goes back to England, Ireland and Scotland. I had been there before but this was the first time playing and it was a really important thing for me. As for why it took so long – we just never had a contact to make it happen before.”

This year they also headlined the super-cool Muskelrock festival in Sweden, which lays on what is essentially an abandoned ‘60s fairground.
“I wandered around the festival after our show and checked it all out. It was really cool and had never seen a festival site quite like it! It really did remind me of the old circus acts that used to roam around in the States long ago. The art was old, classic and cool”.

Hellwell features a similar line-up to Manilla Road but the level of fantasy and mythology is somewhat more of a gloomy nature. Mark ‘The Shark’ agrees; “Hellwell is the dark side of Manilla Road that was exposed every once in a while on ‘Out Of The Abyss’ [1988] and the ‘Courts Of Chaos’ [1990] albums – the horror stuff”.

Sticking to a particular sound and theme isn’t a walk in the park but the Road accomplished it. It’s refreshing to hear that they have separated into a double-headed dragon to dance with the shadows of death!
“Ernie told me about a new story he had written called ‘Acheronomicon’ and me being so into the Cthulhu stuff I just had to read it,” Mark explains. “The topics are more downright wicked and it was a genre I really wanted to explore more lyrically but did not really feel that it was fitting for Manilla Road to do so. I have engulfed myself in all styles of literature but for some reason I really gravitate towards wickedness.
“My favorite authors are Poe, Lovecraft and Robert E. Howard! Howard is my ultimate favourite. He seemed to be able to write anything and make it really cool. His Conan and Cthulhu stories are the tops in my book”.

Something which has been very apparent and key to what has shaped Manilla Road over the years is the consistent interest in fantasy and mythology but Mark tells us that, “for the most part the Road has a good moral attitude to it. Hellwell has an eerie touch to but it’s still very progressive in a Deep Purple kind of way”.
There are also compelling comparisons like Uriah Heep, Blue Oyster Cult and general ‘80s heaviness.
“Not a bad analogy at all,” agrees Mark. “I think if you throw in a little Manilla Road you have the equation sussed”.

Speaking of which, with lots of heavy, thumping keyboard on the album, the legendary Jon Lord springs to mind.
“Yeah it sucked to hear about his passing. He was an essential part to the development of keyboards working in really heavy music. A remarkable musician and talented composer for sure. I know it really hit Ernie hard when he heard about it because Lord was most likely his favourite keyboardist of all time. We could not get in touch with Ernie for days after we found out”.
True music lovers. It’s great to see long-time rockers with such passion.
“Oh yes! I have hundreds and hundreds of LP’s and CD’s of many bands. Of recent, the new Angel Witch is really cool; Grand Magus; Argue; Orchid; Blood Farmers. Gods, forgive me, but I even like Katy Perry’s new song. Yeah, I know, everyone else thinks I’ve lost it too.”

Swiftly moving on, we were surprised Mark hadn’t mentioned fellow epic US Metal masters Cirith Ungol. Them and Manilla Road are often mentioned in the same breath.
“My hat is off to Tim Baker and the gang for what they accomplished,” he tells us. “I think they actually got started a little before Manilla Road did. I contacted Tim sometime back to see if he would be interested in doing a tour together but unfortunately he said that the band was done for good and there was no possibility of doing it. It could have been glorious. I really love the old Cirith Ungol stuff”.

That’s a real shame. That would have been absolutely killer. Well at least the world still has Manilla Road and Hellwell. The lifestyle of a working musician can be pretty hectic, now with two groups on the go there mustn’t be much time for the ladies?
“Bring them on! I don’t have a girlfriend or a wife so I’m open to propositions [laughs].”

As for writing the music for Hellwell… “[However] ‘Deadly Nightshade’ is the only song on the album that I wrote by myself. Ernie had something to do with the rest and Thumper even took a hand at helping to write ‘The Strange Case of Dr Henry Howard Holmes’. The only reason I wrote ‘Deadly Nightshade’ on my own is because it was originally going to be on the ‘Playground Of The Damned’ album [Manilla Road 2011] but it never made it on”.
Well everyone smashed it! The Hellwell artwork for ‘Beyond the Boundaries of Sin’ is great too!
“I love the artwork! It is totally killer is it not? Alexander von Vieding is the bloke and he is great to work with. Ernie sent him a copy of the ‘Acheronomicon’ story and he basically adapted the art from one of the scenes in the story. Side two of the album is a trilogy and is the musical rendering of Ernie’s story and I think that Alex has done a really great job in capturing the feel of the music in the art.”

Is it strange to mix playing with older Manilla Road members in Hellwell whilst Manilla Road itself has new blood provided by Josh Castillo (Bass) and Andreas (or ‘Neudi’ as known to many) Neuderth (Drums)?
“Josh has been working out great. He is a cross between the older sound of the band but has the agility of Ernie on the bass runs – so he has been a big plus for us. As for Neudi, he is an incredible drummer and being the most logical choice for the Road because he is a huge fan of the band and of Randy Foxe [Manilla Road – Drums/Keyboard, 1984 – 1990]. The best thing is that we are all close friends and get along very well on the road”.
So any chance of a two hour Manilla Road show supported by Hellwell?
“[Laughs] We have already thought of that but damn I would be totally spent at the end of each show. We are doing a three-hour show in Athens for the October Up The Hammers Festival. Three hours man. What the Hellwell am I thinking? However, we are having the times of our lives right now. I feel that musically we are going in the right direction and it looks positive for the future. As far as life goes, I’m getting old and it’s time to put the pedal to the metal and see how far I can take this before the gods claim my soul.”