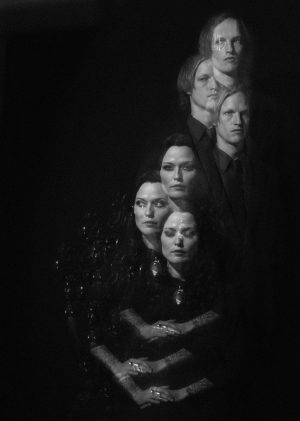 What, wait, no Jessica? When news of a second Sabbath Assembly album dropped earlier this year you could count the minutes between the moment their fans were psyched and the disappointment when finding out that their vocalist was no where to be heard (or seen). The hot-blooded males among us lamented the therefore lack of further photos of her cavorting in a lake, while the more musical of us cried foul at the omission of her lush vocal divinity. After all, would we, the heavy metal community, have cared for an album of hymns from a long-dead religious cult if it were not for the doomy presence of Jex Thoth’s elfin princess? Maybe not, but we’re glad she got us hooked. 2012’s ‘Restored To One’ may have not been metal, per se, but we were transfixed. Now the cult are back with a new album in ‘Ye Are Gods’ and a new line-up including Throbbing Gristle pioneer Genesis P-orridge, Hammers Of Misfortune and Wolves In The Throne Room collaborator Jamie Myers, “death folk” guitarist Imaad Wasif and Sunn O’s violinist Eyvind Kang. You can’t argue with a line-up like that, chalk us up for another dose of Processian theory please…

For those in the dark, what is The Process Church Of The Final Judgement and how did you become involved?
David Christian (founder and drummer): “The Process Church of the Final Judgment was a religious movement that began in the late ’60s and survived into the ’80s, passing through various forms. It began as a post-Scientology group therapy/commune experiment that led to contact with the spirit world and a resulting theology that paired psychotherapeutic work with religious tenants that encouraged individuation, wholeness, and self-acceptance.
“I knew the story of the Process somewhat apocryphally as a result of my research on new religious groups and my friend Jodi Willie of Process Media, a book publishing company unaffiliated with the Process Church, told me that her husband, Adam Parfrey of Feral House, was publishing a book about the Process called ‘Love Sex Fear Death’. Jodi introduced me to the author Timothy Wyllie at a book expo in NYC. Looking through his book I was struck by the plates of sheet music as it reflected some themes I was developing for my rock opera, ‘Original Innocence’. I asked Timothy if I could release some recordings of Process hymns on my label, thus we both hatched a plan at that moment to share the music on a wider scale.”

Have you had any contact with the Church’s members/ex-members? What do they make of your project?
“Timothy Wyllie is an original member and has been a supporter of the band since its inception, and we remain in touch about various creative decisions. Other original members have attended our shows, and one comment was that our renditions of the hymns are more album-oriented, whereas at the time the Church members played them more ecstatically as gospel tunes. There are a few moments on ‘Ye Are Gods’ that reflect this criticism as we let loose with the material a bit more.”

How much of your own faith or spirituality is steeped in the teaching of the Process church?
“There’s been a kind of melding going on with the material and my own journey since the band began. At first I had a strong sympathy with the material but didn’t want to come too close. Having spent much more time with Process founder Robert DeGrimston’s texts over the last couple of years, I have found the hymns and the ideas to be therapeutic with regards to my own story. So when the time came to decide whether or not to do a second record, I realised that I felt much more strongly about the teachings, and thus ‘Ye Are Gods’ is a missionary venture as well as a platform to share some very inspiring music.”

Why do you think music with spiritual connotations has such a profound effect on the listener, compared with say a love song?
“Well, I’m not sure that’s true! Some of my most profound listening experiences have been to songs about the comings and goings of love. Having said that, spiritual music can mean just so many things. A romance song can of course be spiritual depending on how we receive it, just as much Emperor’s ‘In the Nightside Eclipse’. Where we are in our own development when we hear a piece determines how deep our understanding is, and thus how spiritual the music is. I find this most with Indian classical music and other non-Western traditional musics that are highly spiritually charged. I seem to be able to return to certain music and moments in music history or a certain geographic area indefinitely and find bottomless wealth of spiritual terrain to experience.”

Do you think this music can be enjoyed by a non-believer?
“First and foremost the music of Sabbath Assembly is intended to inspire and uplift with some very heartfelt melodies and sincere performance. On this level the band is for any music-lover.”

Do you think Sabbath Assembly can have resonance within the extreme metal scene?
“Satanism probably saved my life! I grew up in an extremely evangelical Christian environment, one that taught me that rock music was from the devil, and the drums – my chief interest – were Satan’s primary instrument. ‘The Devil is in the beat!’ is the mantra I learned. My entire childhood was split between wanting to be a good boy trying to please my church-going parents, and wanting to be Peter Criss. The Satanic movement of the ’80s was absolutely necessary to balance the brain-washing trip I was going through. Slayer and Venom became resting places for my worn-out Christocentric reality. I was always trying to be good and that’s very tiring if you can’t balance it with some pagan activities like drumming.
“While there is still a need for out-and-out Satanic extremism because its opposite still exists, for myself, and I hope others, we can find a place of more balance. That is essentially the message of the Process Church: Christ and Satan joined in unity, dualities fall away, conflicts are resolved. Satan is just a word people use to describe their adversaries, and our adversaries are so often fabricated by our paranoia. So by ceasing to seek out an adversary we may actually finally find room for external, and internal, peace. Thus the fear upon which many religious tenants are based is overcome by love and compassion.”

In an interview Jex did when the first album came out, she said “I wasn’t sure what the metal world would make of Restored to One”, but you seemed to be embraced fully by that world – why do you think that is?
“Metalheads seem to be the only folks that will embrace praising Satan and Lucifer. It’s odd that this idea is such a dealbreaker for so many– even secular musicians I know. We especially found that in performing a song like ‘Judge Of Mankind’ from ‘Restored To One’, the atmosphere can get fairly heavy with the many petitions to these dark gods. So, if you can make it through performing that hymn a few times without getting too concerned about where you’ll spend eternity, then you’ve passed the audition!
“The message of the band I think has a universal appeal, and therefore I don’t have any limitations about where the music should go. The songs are deliberately tonal so the issue of acceptance lies with the lyrics and texts. A hope of mine is that the general populace would fear the dark side less, allowing it to be properly expressed and indulged in their lives so that it won’t rage out of control in isolated incidents. This is the fear that the band speaks about conquering – and vice versa regarding acceptance of the light for those who have a propensity for darkness. This message it seems should be palatable across generations.”

Where do you see Sabbath Assembly going next?
“One of my personal aspirations is that I would like to tour this band through the Southern and Midwestern parts of the US, in particular following the exact path that our ultra-conservative Evangelical Christian presidential candidate Rick Santorum took to win his short campaign towards nomination. Then we would see some disagreement and confrontation – and possible resolution and understanding. The goal would be to film this tour and document the conversation between intensely religious Christians and the Processian concept of the unification of good and evil. We have already toured the Scandinavian metal scene and we actually found the metalheads, bands and promoters to be quite interested in dialogue. Perhaps we can say that Satanists are less fearful than Christians as they are more in touch with the dark side.”