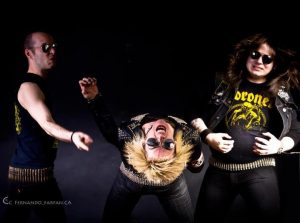 Ottawa, Canada have vomited forth yet another raw, nasty slice of punk metal prowess courtesy of Jo Capitalicide (Cauchemar/ex-Bastardator) called Iron Dogs. “At the time of recording [debut album] ‘Cold Bitch’, I listened to Savage Grace and Omen daily,” he explains. “We wanted the drums to sound like Savage Grace’s ‘Master Of Disguise’, which is really rough and raw. Bands like Gotham City and Vice Human also had this incredible raw feel we were going for.” With songs about vampires, an unhealthy fascination with the Grim Reaper and “trying to find meaning in this pointless existence”, Iron Dogs is where Metal Blade’s early output meets Motörhead and has a fist fight that ends in the gutter. “’Another Night’ is a rock ‘n’ roll song about touring with no budget in shitty vans with shitty gear in shitty venues, never getting any sleep and being underfed,” he continues, and there is a definitely sense of urgency and desperation in their music.
Drummer Dan Lee picks up the description: “I’m a big fan of primitive metal, although I do enjoy polished metal played by highly talented musicians. I am not skilled, I am foremost a fan and diehard enthusiast so what I lack in skill, hopefully is compensated by enthusiasm. My favourite albums are those that capture an atmosphere, a lost time of heavy metal magic.”
So can we expect a live onslaught from these Canadian warriors?
“I don’t think I could play a song through it’s entirety without fucking up,” is Dan’s reply. We take that as a no, then. Still the debut is available now through Dying Victims on CD and Iron Bonehead on LP.