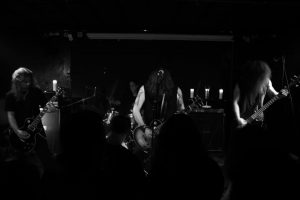 Century Media was one such label that went grave-digging and while they’ve been busy reissuing classics from Marduk and Krisiun of late, it was their ear for the newer bands playing creepy, raw, decrepit death that marked them out. As well as snapping up bands like Morbus Chron and Necrowretch CM brought Isreali act Sonne Adam to our ears in 2011. That year, their debut ‘Transformation’ was thrown onto many an “albums of the year” list and Sonne Adam finally got the recognition they deserve.

Tonight we’re hanging out with frontman Davidov as they prepare to support the legendary Grave and despite the praise heaped on his band around the release of their debut he is still as modest as ever. When asked about how it feels to be playing around Europe with such an influential band he seems slightly lost for words. “Well, Century Media have been really supportive so we’ve been really fucking lucky,” he admits. “It’s pretty cool, they [Grave] were definitely a band I grew up with so it’s really cool to see them on stage every night and we’ve been taking notes.”

The expectation that Scandinavia and the US holds all the cards for extreme metal has definitely faded, as artists from the more confined corners of the globe are unleashing the heavy metal spirit outside of the now-almost-obsolete tape-trading underground. As Annick Giroux demonstrates here at Iron Fist with her World Downfall column, the ease in which bands can spread their gospel is ever-growing and for Sonne Adam the escape from their less-than-metallic homeland was thanks to the online realm. “To be honest, we weren’t even trying [to get signed]”, Davidov recalls. “We literally just recorded some stuff and put it on MySpace. We hadn’t really thought about sending stuff out to labels.”

Founded in 2007 Davidov and Dahan, who recently left the band, were inspired by the European scene and debut EP ‘Armed With Hammers’ confirmed this with a crushing blend of doom death, reminiscent of the ’90s greats. ‘Transformations’ continued to drag us into a blackened abyss with influences from either side of the pond – the raw fury of Morbid Angel combined with the gloomy realms of Asphyx – and despite a much fresher production sound, the origins were still embraced.

With a war going on around them, Davidov surprises Iron Fist by explaining how the religion and hatred surrounding their homes does not influence his music. His love for extreme metal always distracted him and he claims that what’s going on in his homeland is nowhere near as bad as the media makes it out to be. Contrary to popular belief, getting hold of heavy metal records wasn’t hard for the vocalist. “There’s no censorship at all. Nobody in Israel gives a damn and we have way bigger issues to deal with than some kids playing metal. There is a fucking war going on, so who cares? You can get everything, especially now with the web but before that there were always some metal shops near Tel-Aviv and the central cities. And obviously now with the Internet, you can hear everything.” He also remembers tape-trading but was never really a part of “the scene” and with the majority of bands that travel to Israel being more mainstream acts like Ensiferum or Sabaton it still remains a slight mystery how Sonne Adam truly got to be such a powerhouse of death metal on the European scene.

With Sonne Adam now completed by Steel on drums, Butcher on bass and Vitaly sharing the guitar duties, Davidov feels there is no comparison when playing in Israel and Europe. “I always saw myself as part of the European scene, even before Sonne Adam, because in Israel the scene is all about metalcore and hardcore stuff, not really death metal, so it’s been cool to actually be here and play for the people that I actually want to play for. In Israel you can’t really tour. It’s a small country and there’s not really any point in playing somewhere like Egypt, as we don’t want to get murdered,” he laughs, “so, it’s just like one gig in Tel-Aviv, then up to the plane, go to Europe, then go home and same again.

“I always joke about it with my friends actually,” Davidov laughs. “They all used to say you know ‘Hey man, why don’t you go to some festivals in Europe’ and I was like ‘No, I’m just waiting until I get invited to play there!’ And then funnily enough it actually happened so fuck yeah!”

2012 has seen the band not only on this deathly tour but Hells Pleasure Festival also had the pleasure of seeing what we’ve seen tonight; a stripped down, to the point, heavy metal show, with riffs that haunt you for days to come and a rhythm section that causes both floor and viewer to tremble. In between their travels the band also released two EPs on vinyl, which will now be available on CD as the compilation ‘Messengers Of Desolate Ways’. Despite all this and great praise being met everywhere they turn, founding member Dahan decided to part ways with the band in July. “I think it was a surprise to all of us but there is no tension between us, we’re still really good friends”, Davidov explains. “All in all I think he just wants to do his own thing now and that’s what he’s done and started his own band.” Surely this is a bit crazy just before a tour? “Yeah, but if you think about it it’s going to be harder from now on if you want to keep it this way and do more tours. It’s harder to get a steady job and stuff. It’s the right time to leave.”

Despite the bumpy road, in just one year Sonne Adam have managed to sign to a prestigious label, release an incredible debut, tour extensively and cement a tight live line up. However, Davidov refuses to admit to starting a new wave of old school death metal, which is what many experts predicted. “Honestly, when we started the band we said we were going to play death/doom stuff as no one really plays that kind of stuff anymore. Then we started doing interviews and would receive the magazines and look through the pages and be like ,‘hmm those guys are interesting, gonna check them out’. Then we realised that lots of bands were playing this kind of shit right now so we discovered there was an old school revival. I personally don’t see us as a retro band or an old school style band. I think that there are a lot of clones right now but there are a few bands that actually pick up where the old guys left off, but more evil, more dark and that’s my goal for Sonne Adam.”