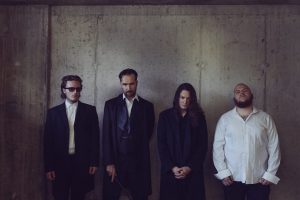 Comprised of four London-based devils, namely Peter Benjamin, David Gray, Samuel Loynes and Dan Abela, Voices set out to become “a diverse and experimental black metal band,” so says bassist Pete, although he now admits that “there is no telling where we may end up musically speaking.”
These are names you might recognise; David and Peter played together in gentlemanly black metal outfit, Akercocke, while Dan has played with Cradle Of Filth minx Sara Jezebel Deva on her solo work and Samuel jammed with Peter in Diminished Fifth. But this is no supergroup. “We don’t want to be restricted creatively by any scene or genre of music,” scolds Peter. “We want to create cold, unusual and extreme music. From initially just jamming, we quickly moved into a deeply intense improvisational stance within the rehearsal space and then began to piece songs together, which happened naturally.”
Elsewhere in this issue of Iron Fist we describe 2012 as a banner year for British black metal; bands like Fen, Winterfylleth, A Forest Of Stars and Wodensthrone breathed life into a scene that had been on its deathbed since, well, Akercocke. So how do Voices feel to be joining this band of blackened brothers?
“There seems to be a lot of new and young bands in the UK tearing a more dark and blackened hole in the metal scene. And I think that’s a great thing, it’s a hopeful and most essential time for British BM.”
Samuel adds: “The ebb and flow of popularity surrounding a band’s music style or genre should not be a conscious thing. Being concerned with that will hold you back, especially within extreme metal that is, at its best, an inventive and against the grain genre. It’s obviously a positive that extreme metal’s backbone is again getting stronger and we support that fully, but we’d be making this noise either way!”
Thank goodness!