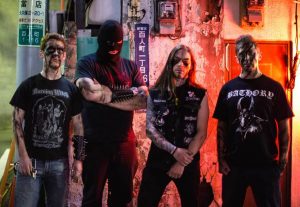 Despite this, Darkcorpse’s independent approach has created two misanthropic records, with a third already in the pipeline. “As a band we tend not to mull over ideas too much, and as a result our writing process is typically rather quick. For us, the band is an outlet, a way to release and relieve various sources of stress and frustration, not least of which comes with living as an outsider in a foreign place. Although we have a strong black metal influence, we never want to subject ourselves to stupid, arbitrary rules and worry about genres. Darkcorpse is a cathartic expression of aggression and that’s reflected in the cold, dark tones of our music.”