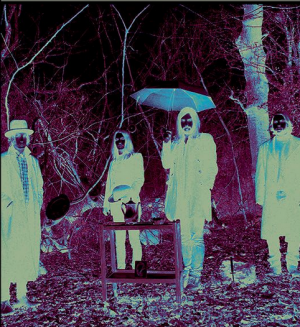 Ghost were first, in 2010, and then all those bitter they were late to the spectral party went hunting for anything similar – Uncle Acid’s ’70s steeped rock riffs and penchant for b-movie horror fit the bill perfectly. And yet it was Rise Above Records, once again, who snagged the booty and signed them to their label. The reissue of ‘Blood Lust’ was a dramatic re-birth – coming out on limited, die-hard vinyl and immediately going on sites like eBay for five times the original cost. And thus last year, it seemed, occult rock was a thing. Ghost, Uncle Acid, Jess & The Ancient Ones, Gold, High Priest Of Saturn… it was cool to be a ghoul. High Street fashion brands started utilising the inverted cross, pentagram’s hung from the necks of listless hipsters, sales of black velvet and red candles went through the roof. And in keeping with the mystique of Ghost, no one knew who was behind the Deadbeats. Electric Wizard? My Morning Jacket? Lee Dorrian himself? We heard all the rumours. But with a new album due, KR finally bit the bullet and revealed himself to select journalists to defend himself from all the hype, and Iron Fist were first on the list.

“It just seemed like the natural thing to do, I guess,” he shrugs of his reasoning behind keeping schtum about his identity. “I think a lot of music is missing mystery, which is something that they used to have back in the day, in the ’70s. There wasn’t a lot of info about bands and you really had to dig to find anything. Nowadays it’s all Twitter and Facebook, there’s so much information. I just wanted to do the exact opposite and make it just about the music, because I think that’s more important. I used to think my favourite rock stars were these mad men that lived in a castle, but when you see them it ruins the whole idea.”

That KR wants to hark back to the ways of the ’70s is no surprise, that nostalgic vibe is oozes out of every riff on both ‘Blood Lust’ and the new album ‘Mind Control’ – modernity be damned!
“Growing up I was listening to ’70s rock, early Aerosmith, Zeppelin, Pink Floyd, stuff like that and then I heard Black Sabbath and that just changed everything after that – I just wanted to play guitar and grow my hair, smoke weed everyday and go nuts basically and that’s what I did,” he laughs. “It ruined me in some ways. During ‘Blood Lust’, I don’t know what I was listened to really; Sabbath, Maiden, WASP, Pentagram… With this new album there’s more of an American influence, with early Alice Cooper, The Stooges, Neil Young, Crazy Horses – it’s a bit more diverse.”

We agree. We’ve heard the new ‘un and while ‘Blood Lust’ was Hammer Horror; so British, so misty, so haunting, ‘Mind Control’ makes us think of slash and gash movies like ‘Motor Psycho’ and ‘Race With The Devil’. It’s more schlocky than spooky. More ‘Steppenwolf’ than howling wolves. And while some of the films it references have a touch of evil, ‘Mind Control’ is honouring 1960s and ’70s movie making, much more than it is the Great Horned One. Occult rock? No way, says KR. “It’s basically nonsense. I hate that sort of thing,” he scoffs. “Obviously that’s something that’s interesting to me, the occult and things like that; but it’s more of a film influence. With ‘Blood Lust’ it was pure Hammer Horror and then this new album doesn’t have anything to do with the occult at all, it’s more of a biker, exploitation, American album.”

A road movie inspired album needs a road worthy author, and as of yet Uncle Acid & The Deadbeats have yet to escape their Cambridge basement and hit the highways. But in July last year it was announced that the cult would be leaving their hovel to play in London, before embarking on a few, select European summer festival slots. What happened next was unprecedented and unusual for any band just starting out. Their debut gig sold out. Established bands, who have been doing this years, rarely sell out in London these days. “I don’t think we were really expecting that,” KR says, the shock still resonating. “I mean, we put the tickets on sale months in advance because we weren’t expecting that kind of response, but then it went crazy and we had to add a second date. We’re looking forward to it, it should be a good couple of nights.”

But why take so long to do these first rituals? No scratch that, let’s make a pact to never use that word again to describe a live show (unless it’s Mare or something).
“I didn’t really feel the pressure that we had to play gigs, because we were always looking for a second guitar player. But, once we found one it was like ‘oh, maybe we can actually start doing gigs now’.
“We were a band but then we broke up when we were making ‘Blood Lust’,” he admits of the trials and tribulations of finding a full band in the wilds of Cambridgeshire. “I ended up having to record pretty much all of ‘Blood Lust’, then by the end we [KR and his drummer, Red] just said, ‘Right, that’s it, we’re finished with everything, we’re never going to get anywhere because we can’t find any musicians’. That was going to be our last album because we didn’t think we had a fanbase and then obviously that album picked up and people went nuts so we decided to start it up again, but this time with new musicians.”

On that success of ‘Blood Lust’, how did KR cope with the unprecedented waves of adoration coming at him from all angles, not to mention the anger over the vinyl selling out so fast? “That was kinda of unfortunate,” he says, but he’s no stranger to putting things out on limited copies. He explains, that’s it not a cash in, but more fear that not many people would care. “The thing is, we did an album before ‘Blood Lust’ called ‘Volume One’, which we only did 30 copies of because we didn’t know what the market was. Anyway, once it took off that was very surprising because I thought, ‘how do people hear this music?’. I guess the internet and word of mouth, it just spread and then built up and obviously Rise Above was a big help.

“But I don’t feel any pressure,” he adds. “The music has always just been made to entertain myself, for my own satisfaction. I don’t write for anyone else apart from me, so I just let everyone else go mental and come up with wild theories about who we are. I’m doing what I want to do and luckily Rise Above are giving me the freedom to keep making albums that I want to make, so as long as I can do that then I’m happy.”