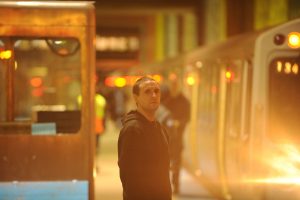 Spreading their message of freedom and dreams, High Spirits are guaranteed to put a smile on your face. Calling themselves “100 per cent high energy rock music”, they take the listener back to the late ‘60s and early ‘70s when Deep Purple and Steppenwolf assured us everything was free and hot rockin’, before the clouds turned black, Sabbath and Venom ruled our world and infected rock with evil charms. And yet here we are today reading an entire magazine with bands referencing Him, the occult and witchcraft. High Spirits stand out from their contemporaries. This is not only due to the lyrical content but to outstanding vocals akin to a clarion call. These are classic songs that stick in the brain.

The main man behind High Spirits is local sensation, Chris Black. “Professor Black” has been playing music since the ’90s and is probably most known for his time in the heavy black metal band, Dawnbringer. He is also behind two other notable bands from the Chicago area, Superchrist and Pharaoh. We might call him a virtuoso with his flexibility of musicianship, but we’re more interested in finding out more about being Chicago heavy metal’s driving force, his opinion on the resurgence of heavy metal and of course, High Spirits.

“I embedded myself in heavy metal as a child and I’ve embedded myself in band activities since I was a teenager? It’s hard to see where the bands end and the outside begins,” he tells us. Trapped in a world of music? That’s die hard. Heavy metal. So, what sustains Chris in the perpetual lifestyle of a working musician? “The answer would be my family. Most of my life is spent doing my part in making sure we have the freedom and support to pursue our dreams together. And my family knows how important music is to me. They know it takes work and time and a little bit of luck. They have always been on my side. At family gatherings I never hear things like ‘When are you getting a real job?’ It’s always been more along the lines of ‘So, was London everything you dreamed it would be?’”

With the amount of pressure put on people in the real world it must be a treasure to be able to follow your dream. It comes as no surprise to hear this from Chris because with High Spirits a feeling of warmth and humility shines through. And with music so based in the heavy metal of old we have to ask him what time he is most inspired by.
“I guess maybe 10pm until 1am. 2am on a good night!”
Always the joker!!

At this point maybe we should make it clear that Chris is still involved in three other bands. How does he find room for another project? “High Spirits began as a space where I could follow my musical and lyrical instincts without any expectations or judgment,” he explains. “I recorded some songs for fun and put them on the internet. The rewards that followed were welcomed and quite unexpected. I think that the audience can sense this and to some extent participate in this as well.” Perhaps the crowd pick up this optimism and want it to apply to their lives? It’s clear that High Spirits is very much a personal thing to Chris, so much so that he composes and performs all the music by himself, much like Quorthon did with Bathory. This is a proven technique for creating pure music and is often effective. Chris explains the logic behind this: “I always want things to sound a certain way, but it’s not always so easy to express that in words, or even musically, without time to explore. It’s one of the great ironies of studio recording that it can take a lot of work to make something sound spontaneous!”

High Spirits continue their rise in popularity and are in demand to play live. Surely the ideal situation would be to get a stable line-up together rather than counting on session type members. “These guys are some of my best friends, and they really know how to deliver a great rock show with no messing around. On the other hand, the recordings are a result of a whole load of messing around, meaning that there’s a lot of experimentation and trial-and-error involved.” Despite his obvious talents, Chris has friends in other good metal bands that can help him fill his ambitions. “Bob and Mike both play in Züül. I’ve known them both for ages just from playing gigs together, releasing each other’s records, and so on. I think their accomplishment with Züül speaks for itself, but I can also tell you that they bring a lot of energy and power to High Spirits. Drummer Ian has been in Superchrist with me since 2007, so we work together quite naturally. Scott (guitarist in Dawnbringer) has been a close ally in heavy metal mania since we were roommates at college in the late ‘90s. He’s also responsible for the layouts of almost all of the releases from our musical family.” Scott is surely a talented guy. Where did the inspiration come from for the new artwork on the debut album ‘Another Night’?
“From just behind those tall buildings”.

As summer 2013 approaches the new festival season is in sight. Playing at last year’s Muskelrock festival, Chris comments; “We kept hearing that Muskelrock was impossible to describe. Too unusual, too special, and having been there I can only echo this same view. It’s very hard to find words to describe that atmosphere. It’s chaotic, inviting and rewarding.” Iron Fist were keen on knowing if High Spirits will be playing any other crazy festivals this year. “It would be great to do a few gigs in the USA this summer, but there’s nothing specific in the works. Then later in the year we will begin production for the next album.”
That’s music to our ears. “We’re looking at 2014 for a release so it may be a little before there is any news on that,” he reveals.

However, we happened to notice the demo of a new track entitled ‘If I’m Gone’ on the web, with a sound that appears a bit more bass heavy and chunky. “If that is a starting point for a few more similar songs, I can’t say,” he tells us. “It could just be something to get out of my system.”

Well, we hope the new album is just as well-received as much as the debut has been. Although it is safe to say it should have been heard by a wider-scale audience. Does he feel that being based in America has isolated him from the rest of the heavy metal community in Europe? “Good question, and it’s impossible to know the answer. Maybe so. Maybe we’d have burned out and disappeared completely by now! It’s fun to wonder about, but we’re very happy with how things have progressed. Stay positive!”