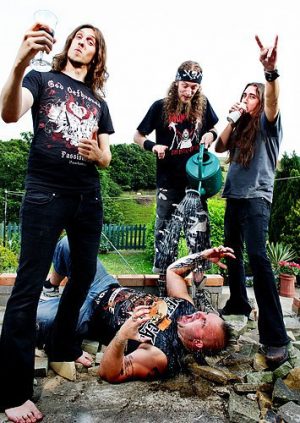 The bubble has well and truly burst. And thank fuck, some of you might say. In the mid-2000s it was rad to wear hi-tops, chug beer bongs and sing about zombies. You couldn’t move at metal shows for freshly patched jackets and trucker caps with the flap riding high, but as the new decade dawned the Bay Area beatification died down and the metal labels stopped pecking at the carcass of thrash. Many of those bands hailed as the second-coming of Slayer have disappeared without a trace, drinking their own toxic kool-aid and Milano moshing back from whence they came. But some, like Yorkshire’s Evile have not only stood their ground, but have proven that, four albums in, they were never a novelty throwback thrash band in the first place.
Forget the trends, Matt Drake, his guitarist brother Ol, Ben Carter and Joel Graham (who joined in 2009 after the tragic death of founding bassist Mike Alexander), didn’t intend to be swept up in the hype, and certainly intend to thrash hard for as long as anyone will listen… and even longer, knowing them! Tenacity is a bitch and these down-to-earth, hardworking Northern chaps have it in droves.

“We never thought about stopping, because that’s not why we’re in a band,” drummer Ben says firmly when asked, with the decline of thrash popularity, if they considered throwing in the towel. “Why change to follow a trend. If we’re not popular, we’re not popular, we’re not gonna try and steer the ship a different way, ‘cos that’s pointless.”
His band mate since formation in 2004, Ol Drake agrees. “We didn’t even expect to get signed or to write an album. The songs on [debut album] ‘Enter The Grave’ are just us having a laugh in the rehearsal room.”

Forever modest, Evile are noted for their self-deprecation, good humour and lack of ego – qualities we cannot put on most bands – but their story is not unusual. They were spotted playing the unsigned stage of Bloodstock Festival in 2006. It was there that they hooked me, I was immediately excited by their youthful energy and obvious obsession with recreating the original thrash sound. I wasn’t the only one… Digby Pearson of Earache Records signed them there and then and the band, who had not even dreamt of recording a full-length, were shipped off to their hero Flemming Rasmussen, the man behind the early Metallica albums, to cut their first record. The band almost pre-dated the thrash boom of the last decade, or at least helped it gain momentum and soon they were shoulder-to-shoulder with Savage Messiah, Mutant, Bonded By Blood, Warbringer and more bands with the same points of reference. The old guard, Kreator, Testament, Exodus – who had been plodding along at their own thrash-happy pace since the original wave – took advantage of the new audience and thrash suddenly became hot shit. Hey, you could almost trace the interest in those arena-filling Big Four tours right back to that tent at Bloodstock seven years ago.

But sales in bermuda shorts and mesh caps are down again, the tide has turned elsewhere but Evile remain. Neon green was never their colour though…
“As people we’re still really childish, and you can’t lose that as that’s what makes you young in the industry,” Ben admits, “but when it comes to music we are the ones who will take it seriously because we want to get longevity out of it, that’s all any band should possibly want, hence getting to four albums. I can’t think of any other English thrash band that’s done four albums in one consecutive run. We can act like idiots…”
“We still read names backwards, like Finsbury Park backwards is Krapy Rub Snif,” interrupts Ol, as if to prove a point. “But as soon as we did the first album we thought ‘we don’t wanna do another ‘Enter The Grave’, so let’s try and do something, not straight-forward, but to the point. Let’s not rely on booze and zombies’.”
“That get boring for us,” says Ben. “However, even though we will change but we’ll always be a thrash band first and foremost.”

Change is a difficult beast to tame, especially for a metal band. Many of the one-trick thrash ponies, with their wacky alko-stunts and skateboarding schtick, relied on “boozie and zombies” and where are they now? But Evile could’ve just written their mosh anthem ‘Thrasher’ over and over again and made their growing fan-base very happy indeed. Something tell’s us that’s not on the cards. The band have famous been compared to Metallica, something they’ll happily concede, and if you follow the two bands’ careers this would make ‘Skull’ their ‘…And Justice For All’, is the more radio-friendly ‘Black Album’ vibe coming next? Will Evile go all ‘Load’ on us?
“I’d like to think we’ve got the same kind of bravery they have in terms of trying new things,” Ben says. “There’s a reason they are what they are.”
“I kinda like that they did Load even though a lot of people didn’t like it at the time,” is Ol’s honest take on it. “I think it was really clever of them to do that. They said, ‘you know what, fuck you, we’re doing this’.”

Evile’s new album certainly isn’t ‘Load’, if anything it’s the most metal album they’ve done.
“Yes, we’ve rediscovered our thrash roots,” says Ben. “It’s more up-tempo, heavier. It’s going to kick people in the balls. When it comes to music, I’m a nerd. Matt’s a nerd, Joel’s a musical encyclopedia and Ol’s the one that takes all of that and turns it into a song so we funnel our influences towards him really. There’s a lot of Queen influence on Matt’s side definitely. The stuff he’s pulled out of the bag this time around is dead clever. There’s also some death metal influence, a lot of Entombed influence. We just wanna shake it up a little bit and do what we do but with a new twist, which is a cliche in itself. When people hear the album they’ll know what I’m on about.”

So, what was on the stereo to inspire such a heavy record?
“Cypress Hill!”
Really, Ol?
“Yeah, not thrash. When you’re playing thrash 24 hours of the day in the studio you don’t wanna go back to your rooms and listen to thrash,” Ben laughs.
“We’re not private about our influences,” explains Ol. Well, that’s true. But with the thrash buzz dying down, who is listening to Evile? Is it the old guard who followed thrash since the early days, or is there still the hipster kid with the upturned mesh cap coming to their shows?

“You’ve got the young thrashers who love what we do and they just wanna go nuts,” says Ben, explaining what he sees from his drumkit at their shows. “Then in the middle of the room you got your people who just wanna kill each other to ‘Thrasher’ and then at the back you’ve got the guys who were around during the first wave, who appreciate what we’re doing but they don’t wanna get involved in the crazy side of it, so they’ll sit at the back, by the bar, arms folded and looking pretty judgemental but they’ll still come up and say they love it, which is what matters.”

Does Ben then think that perhaps they paved the way for their younger fans to check out the bands that in turn inspired them?
“My first Metallica album was ‘…And Justice For All’, I didn’t know anything else existed, so I had to go back and listen to ‘Master Of Puppets’ and ‘Kill Em All’ and ‘Ride The Lightning’, so I’d like to think other people do that, why wouldn’t they? I’d also like to think they’d buy our new album and then go back and listen to ‘Enter The Grave’ and the same with Sodom, Kreator, Destruction.”

Having just toured with Kreator and with the album out this month, will our tenacious foursome continue to infect the nations?
“I don’t think we can plan that, we usually just wing it but I’d love to take Evile as far as possible,” says Ben, while Ol admits that, “I’m hoping that we can get back to North America and try and get to South America and then hit all the places we haven’t been, like Australia, Asia, Russia, even India, a lot of things are happening in India now.
“We’ve done four albums and there’s a still a lot of the world we haven’t seen,” grins Ben, “and a lot of people who don’t know who we are still left to convert.”