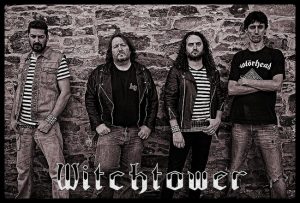 He goes on to reveal that, “we are working on a full-length. We will do new songs at Brofest, but we would like to get more shows in Europe. For us it would be awesome, and another little step in our path. We really love the underground way of metal, the small labels, the classic formats like vinyl and tape and the feel, the look and the energy of all true metalheads who come to our shows. We only want to put another brick in that big wall which is called the new wave of traditional heavy metal. See you at the shows!”