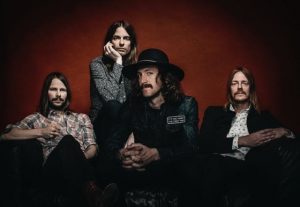 That’s what the band have done on their latest album but there is one stand-out track, ‘The Apple & The Tree’, that deviates from their template of what is perceived as the “cool” and “correct” musical influences (Captain Beyond and Sir Lord Baltimore in their case) to bring in the sounds of what most disregard as “Dad Rock” – we’re talking Eagles and Dire Straits!
“Oh man, I think they’re uncool too,” Joakim laughs, when we explain what “Dad Rock” means. “But I mean, I can appreciate them too. I appreciate that Dire Straits are Dire Straits. That song even had the working title ‘Dire Straits’. Though my dad didn’t like that kind of music, a lot of people got into music through their dad’s record collections, it’s not a bad thing.”

As someone who was lucky to be raised with the parental vinyl collection ranging from Hendrix to Lou Reed to Neil Young, it’s interesting to find out what was playing in the Nilsson home.
“Mostly classical music, my dad was a violin player and my mother was an opera singer,” he reveals. So, was hard rock his rebellion?
“My rebellion was not playing music at all, but I couldn’t stay away for that long. I started playing with my friends in a punk band, not really a conscious thing to be rebellious, it was just what my friends and I were listening to.”

Going back to this idea of certain music being perceived as “cool” Joakim laughs at the suggestion that he was a “cool” kid. “I listened to very uncool punk rock music, nothing you’d want to mention, it wasn’t that good – it wasn’t that cool either. I always knew I was the cool kid but the other people didn’t think so.”
From playing punk, Joakim formed Norrsken with Magnus, Dead Man drummer Kristoffer Sjödahl and former Graveyard bassist Rikard Edlund in 1995. Just 16-years-old at the time, in a world before Spotify and YouTube, the three friends would hassle the dealers at their local record fairs. “Together we discovered all this hard rock music. We had a lot of help from record dealers that put us onto all these obscure bands. Imagine, you’ve got four kids just looking up to you wanting to hear more of your stories. It must have been weird but fun to have these kids sucking all this information out of you.”

These days you can find everything you need to know at a click of a button, but when it’s so easy to download the entire catalogues of bands like Captain Beyond, do we actually need revival bands like Graveyard at all?
“If you think of us as just a throwback band then yes,” Joakim thinks, “but we don’t consider ourselves being that, we consider ourselves playing new music for a new generation, not just the ones who like ’70s classic rock music, so no, we’re not unnecessary. We’ve never tried to be a ’70s band, we try to be a contemporary band with a lot of different influences, from the ’70s and also the ’60s and sometimes even the ’80s.”
And then there’s the fact that while most of the classic bands are now retired or sadly passed, Graveyard are very much a touring institution. “Yes, we are definitely a live band. When I feel the best on stage is when you feel like you’re not even there. You can lose yourself, go into a trance almost. It’s a great feeling.” So, then, if time travel were possible, who would the band love to play with and when?
“I don’t know, tomorrow,” Joakim laughs. “Like I said we’re a contemporary band. I want to play now, it’s never been more fun playing music than right now.”