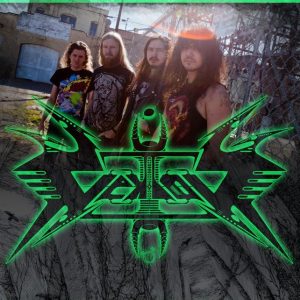 Not a fan of any of this retro-thrash stuff. How did cloning become acceptable in a style born as an outcast spinoff of traditional heavy metal? Thrash metal, in its prime, was a defiant gene splice of individuality. All the worthy bands of the 1980s put their own unique stamp on the form. Yeah, there were clones even back then, but in 2012 we get nothing but clones. Where is the modern band with lyrical depth and multi-dimensional music on the level of a Holy Terror? Where are the outliers like Blind Illusion and Realm? Where are the visionaries? To my ears, there’s but one modern band pushing the form forward, and that’s Vektor. Vektor is bad ass.
Drawing from the glory days of Voivod, the seething insanity of early Sadus, the off-the-chain wildness of prime Destruction and inspiration from the black metal and prog rock fields, Vektor have been seriously hot shit to any ‘head who first heard their ferocious demo emanations in the mid-2000s. Fast-forward to 2012 and the band have two mind-mangling full-lengths to their credit (2009’s ‘Black Future’ and last year’s ‘Outer Isolation’); their label, Heavy Artillery, recently partnered with the legendary Earache Records; they’re embarking on a tour with Municipal Waste, Exhumed and Napalm Death, and at the time of this writing just got off the road with Primordial and While Heaven Wept; they hope to grace the studio again early next year. Things are beyond excellent in Vektor-land.

Guitarist/vocalist David DiSanto and bassist Frank Chin gave Iron Fist some time recently, fresh from a move to Philadelphia, having departed their home state of Arizona earlier in 2012. Says David; “We were all getting bored being stranded in the middle of the desert. We wanted to move where we could have better touring possibilities, and Philly is a prime spot for that. The people are awesome and there’s a great underground music scene there.” Adds Frank; “Myself, along with [drummer] Blake [Anderson] and [guitarist] Erik [Nelson] were born and raised in Arizona and needed to move on. We’d toured through Philadelphia before and loved it. Everyone was super rad and the bands were sick. It’s been great.”
Friends with revivalist thrashers Havok (Colorado), Vindicator (Ohio) and Lich King (Massachusetts), the dudes in Vektor are immersed in traditional thrash from head to toe, familiar with what’s around them in this wasteland. “Our goal was never to copy anything that had been done before,” says David. “We took a lot of influence from the ‘80s thrash bands, but also have a million different influences, from black metal to ‘70s art rock. We want to do what a lot of the early ‘90s thrash bands did and evolve the genre into new areas. We wouldn’t feel satisfied if we weren’t doing something new. If bands are just copying what’s already been done, it’ll just end up being a fad because people will get sick of hearing the same thing over and over.”

Frank, on the other hand, is pretty cool with it all. “New bands are out there killing it, doing what they love and doing very well. Yeah, some may need to look deeper within for more of a creative influence, but regardless, it’s good music and people. We found ourselves in a pretty cool spot because all of us appreciate the same music and know what Vektor should sound like, but have varied influences personally. The incorporation of these influences made our sound.”
Perhaps taking a look at the band’s influences will help explain what truly sets Vektor apart. “I’ve always been heavily influenced by black metal and ‘70s prog,” admits David. “I thought it would be cool to take our basic thrash influences like Destruction and combine them with Emperor, Absu, Pink Floyd and Rush. It sounds like it wouldn’t work, but that’s our sound. The goal is to not rip off any of the bands you’re into while being inspired by them.”
Frank adds, “My main influences, other than more obvious ones, are Iron Maiden, Hawkwind, Motörhead, Watchtower and Neil Young. I get the same enjoyment and inspiration from all of them in very different ways and definitely incorporate them into writing. All I want to do is inspire creativity and new possibilities in unorthodox ways, whether it be with music or another form of art. Anything is possible.”

Frank’s philosophy sounds a lot like a certain Canadian troop who the band are heavily influenced by. Indeed, Voivod have been mentioned in almost every Vektor review and the bassist (who sports a rad Voivod tattoo) makes very clear his passion for albums like ‘Killing Technology’, ‘Dimension Hatröss’ and ‘War and Pain’, while David adds; “All of us are big Voivod fans. The early era up to ‘Nothingface’ is my favourite. No one will ever be able to replace Piggy, but it’s awesome that Voivod is continuing their legacy with Dan Mongrain.”
Voivod’s influence can be heard when Vektor slay with diminished, dissonant chords, breaking out into odd rhythmic patterns, or focuses on weird sci-fi subject matter, all of which they do often. The band have often been called “sci-fi prog thrash” and why not? They kill listeners’ brain cells while at the same time stimulating them. “We’re definitely progressive,” says David. “My definition of progressive is an epic song that if you heard the intro, middle, or ending separately from each other you wouldn’t know it was the same song. The song only comes together when you hear it evolve from beginning to end. I like songs that take me on a mental journey. Progressive metal is just a heavier version of what bands like Rush and Yes were doing in the ‘70s.”
One wonders if Vektor will go all the way, morphing and changing significantly over time. It’s the kind of evolution that pisses off more conservative fans while being exactly what more adventurous listeners are looking for: that big, broad, unpredictable journey. Frank is careful to make such a prediction, saying, “Only time will tell. No matter what happens, it’ll be natural. It’ll be what we want to do as a band, not what others want or expect. For now, we’re happy with what we write. I don’t see us changing super drastically.”
Let’s hope not, as ‘Outer Isolation’ was one of the best albums of 2011. It’s a hulking thing of jagged riffs, unusual melodic configurations and epileptic rhythmic fits. It makes you feel like you’re hurtling through the cosmos, forgotten in space. Each of its eight songs is epic in scope (half of them over the 6-minute mark), all twisted up with a serious sci-fi obsession. Vektor are special, and they have just begun to obliterate.