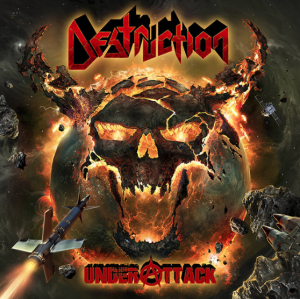 Teutonic thrash masters Destruction have unleashed the cover artwork to their upcoming album ‘Under Attack’. The apocalyptic vision was created by Gyula from Hungary, who has also worked with Annihilator, Grave Digger and Stratovarius.

The band said: “I had the vision of the exploding earth with the Destruction skull as continents before we even had the title. Never has the earth and every individual been so under attack: whether it’s environmental issues, wars or politics and media madness, we just destroy everything that we love! The cover brings together the classical concepts of the band’s history and fits in well with the discography but unfortunately it also represents the current state of the world today!”

The band started the recording sessions for ‘Under Attack’ after the summer festivals last year and have been recording segments in various studios between September 2015 and January 2016. So far they have completed the drum recordings with Martin Buchwalter at Gernhart Studios in Germany, as well as completing some of the abum, including mixing and mastering with VO Pulver at Little Creek Studios in Switzerland.

‘Under Attack’ will be released on May 13 via Nuclear Blast Records.