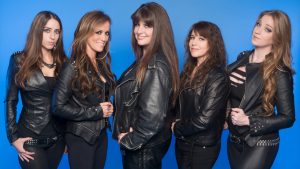 Formed in 2001 in Southern California, the Iron Maidens have quickly established themselves as one of the most notorious tribute act in the US, progressively expanding their fame far and beyond America. They have conquered the attention of fans and fellow musicians with their musical prowess and electrifying live shows, including getting a nod from Steve Harris himself, as discussed in the upcoming issue of Iron Fist.

The band features Linda ‘Nikki McBURRain’ McDonald on drums (ex-Phantom Blue), Nikki ‘Davina Murray’ Stringfield (from Before The Mourning) and Courtney ‘Adriana Smith’ Cox (also of Queen Diamond) on guitars, Kirsten ‘Bruce Chickinson’ Rosenberg on vocals and Wanda ‘Steph Harris’ Ortiz on bass. While Iron Maiden’s latest album hits the stores, the Iron Maidens celebrate the recent release of their first full-length studio album, the first studio tribute CD to a band ever recorded entirely by one artist; the cover artwork featuring a female monster was designed by none other than Eddie’s creator Derek Riggs.