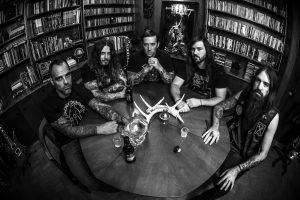 How did the reissue with Shadow Kingdom come about? He must be happy about the album getting released to a wider audience so soon. “The SKR signing was very happenstance,” he says. “We were approached directly by [label boss] Tim as a fan of the band. We were already picking up steam rather autonomously, but self-promotion can only go so far. SKR just seemed like the next logical step: a regarded label with a decent range of influence and a relatively like-minded roster. The initial releasing was in a very limited quantity which quickly sold out in most formats. Therefore the SKR reissue will not, to my knowledge, differ much sonically or stylistically from the Rain Without End/Saw Her Ghost releases. It is simply giving the album a much wider birth now that we have begun to make a name for ourselves.”

When asked what inspires their overall sound Michael responds; “It’s all about old horror, death, and doom metal. We take influence from the death/doom of old and more mid-paced death metal. We love Grave, Asphyx, and Autopsy. We also love the melancholy sounds of those early My Dying Bride and Paradise Lost albums and try to combine the influences in a fresh way to the best of our ability.”