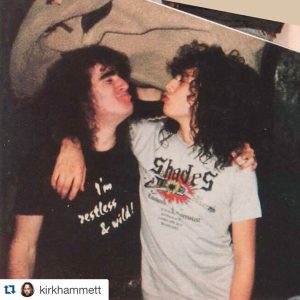 But reflecting their ol’ pals Metallica’s support for Record Store Day, founding axeman Scott Ian has some words to say about people’s attitude towards buying new music. He says in a video shot this week in London, that “Shouldn’t ten or eleven new songs by your favourite band be enough?”
He also says that he “stills loves going to record stores” and that he’s worried it’s “an experience that [future] generations will never understand”.

“It’s like pushing your little bird, your little baby, out of your nest,” bassist Frank Bello tells Iron Fist’s Martin Popoff, on making new albums. “You nurture it to this point and then you start doing interviews, people hear it, and hopefully everybody likes it as much as we do. We’re just psyched, honestly, to be at this level in our 30-something year career. People have a real nice buzz out there for Anthrax and it’s a great feeling, man.
“Just be honest with who you are,” continues Bello, underscoring the fact that the band is simply executing all those time-honoured Anthrax moves that were baked into them as far back as the seminal ‘Spreading The Disease’ and ‘Among The Living’ records in ’85 and ’87 that made their infectious name. “And then, no, don’t try to compete. Don’t try to be anybody else you’re not, because all that really goes out the door. It doesn’t matter. Who the hell wants to live in somebody else’s shoes? You always have to be yourself and that’s what makes you different than everybody else. So this new Anthrax record is quintessential Anthrax. It’s exactly who we’ve always been, a truthful band playing heavy music with great vocals and great melodies. I think that’s the secret of Anthrax; that’s what people get into, because we have such heavy music with Joey’s voice on top of it singing these great melodies – it’s a nice little combination.”

‘For All Kings’ is out today