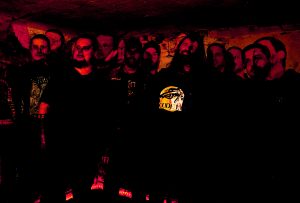 The band said of this cover version: “Chris from Fucking Kill Records asked us if we would be willing to cover ‘Triumph Of Death’ for his ‘A Fucking Tribute To Hellhammer’ sampler 12”. The result was in our opinion so good, that it also deserved to be released on ‘Carrier’. ‘ToD’ (what a perfect abbreviation!) is a typical BSON track, beginning well-structured and ending up in full deconstruction. Our approach to the works of Tom. G. Warrior and Hellhammer was a very respectful one. We even tried to preserve the unique technical unbalance of the original. Of course the sound is BSON through and through. Some will like our version, others will hate it.”

The night is alive again!