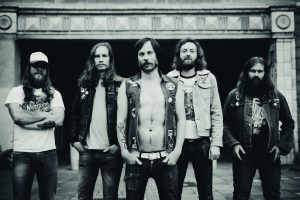 “We started to jam and drink some beers every Saturday for a while,” he explains. “Good times and the songs kept coming. We released two full-length albums and right now we’re mixing the third.”
That was then, and this is now as that third album ‘Wandering Blind’ is ready and being streamed right here at Iron Fist.

Talking of their influences beyond Messrs Leibling and Winter, Johan tells us that “bands like Jerusalem, Bang and of course, Sabbath was in the early stage of Brutus, but we’ve got our own style of more bluesy heavy rock now. We all listen to Grand Funk, Deep Purple that I think coloured our songs too. A lot of blues bands too, I listen maybe more to the Peter Green Fleetwood Mac, Bluesbreakers, ZZ Top and Free than bands like Black Sabbath.”

Recorded live in just four days at Engfelt & Forsgren Studios in Oslo by producer Christian Engfelt, ‘Wandering Blind’ is honest and as down-to-earth as it gets. Johan says; “that recording was done like our first album but this time, we nailed it even better! We’ve known Christian for many years and knew he shared our taste for the ’60/’70s music and also was the right guy as far as how to record that sound and feel. He’s got a new fantastic studio and we did the whole thing quickly through an old tape machine and old pre amps. This is the first time we used someone that we could work with as a producer but we welcomed his ideas and thoughts in the process and it worked out perfect.”

You’re telling us!!!
‘Wandering Blind’ is out this Friday, May 20, via Svart Records