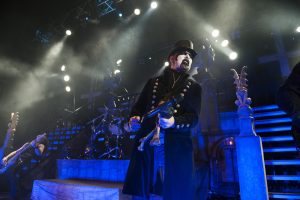 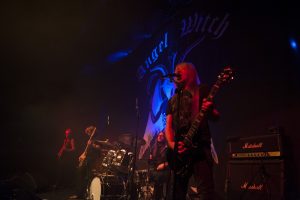 In the run up to the concert the rumours of who would open for the King were buzzing. Would there even be a support? The logistics alone were migraine-inducing. The King promised to bring his full ‘Abigail’ stage set to The Forum, a mind-bending feat of stage-space Tetris, so would a support act even have the stage in which to perform? However, the most perfect solution was sought when Angel Witch were announced to play. The complete foil to King’s overstated occult opulence would be the stripped-back, proto-NWOBHM warhorses, all dressed in black, no thrills, no dancers (unless you count their tech running on to rescue a rogue hi-hat), just a masterclass in heavy metal perfection.

A bit of transparency here – some have criticised Iron Fist’s ability to rightfully critique an Angel Witch gig – two of them are deeply involved in our organisation. Yes, this is true, let’s be upfront about it, but on the flipside, surely then we’d also be the first magazine to go for the jugular if they were sub-par. We’ve seen them play some shoddy shows in our time, believe us. Truth is they were unreal. Truth is, it was a jaw-dropping, what-the-fuck-just-happened Angel Witch show that sideswiped even their closest friends who’ve seen them countless times. We’re not sure if it was the fact this London show was on the back of a spirit-lifting show at Primavera Festival in Barcelona earlier in the month, we’re not sure if it’s the new members in the band that are making Angel Witch tighter than they’ve been since those first album days back in 1980, maybe it’s the fact they’re playing on home turf in a packed out venue of friends and family, but there’s a fire in the band not seen in a very long time. They’re tasting blood tonight. 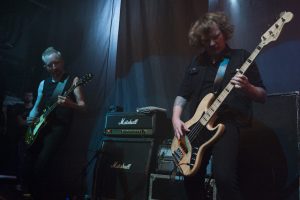 This has to be the crossroads for Angel Witch. You don’t come off a show like that and go back to coasting along. In the NWOBHM pantheon there are three groups, there are the untouchables – the bands who captured the zeitgeist and never gave up (the Maidens and the Saxons), there’s the unfortunates (the ones you love to watch, in pub backrooms, with their Werther’s Original nostalgia that you just just adore) and then there’s this middle ground of bands like Satan and Angel Witch who you just know can push through and be relevant in the here and now… but Satan are licking Angel Witch with two perfect albums as good as anything they put out in the ’80s. Tonight’s show proves that Angel Witch are at the top of their game and they need to keep that momentum now. That giant Baphomet, leering down at everyone between bands, is seared into our memories, an iconic reminder of who the great NWOBHM bands are and can be again. It was a proud night for London’s heavy metal scene, a proud night for their friends and a proud night for Angel Witch.

They’re not the main attraction though. And as good as they were, it all becomes a distant memory when the Baphomet is ripped down to reveal the all-by-now-familiar staircase that provides the setting for the story of Miriam, Jonathan and their failure to take the necessary birth control. As previously suggested, every millimetre of space on the stage is taken up with props and stained glass windows and gigantic pentagrams. This is true stagecraft, this is eye-assaulting wonderment with the audience trying to take in every aspect of the performance – from the ‘Welcome Home’ of the wheelchair bound Grandma to the gargoyles hidden in the eaves, but The King is a seasoned master and draws attention back to him at every step. Up close and personal, he bewitches the audience as he displays his wares – whether that be musicians, dancers or props – weaving his gruesome ghost stories to a willing crowd.

With King’s past still very much in the minds of London’s fanatic audience it’s not surprising that he gets the biggest reaction to some early doors renditions of Mercyful Fate favourites ‘Melissa’ and ‘Come To The Sabbath’, followed by a crowd singalong of ‘Them’ before it’s storytime. 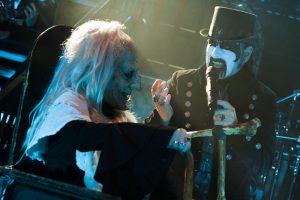 Having seen this show many times, but at a distance, it’s clear that theatre shows are when the King, and his band, shine as you can see the whites of the singer’s eyes as he tells his ‘Abigail’ tale with glee. He’s the mainman, of course, but you cant hide the excitement at seeing Andy LaRocque in close quarters too and as the strains of ‘Arrival’ start you can’t help but look around and see the whole audience enraptured by the show. It’s over in a flash and mouths are wide throughout the venue. London just witnessed a heavy metal sucker punch. You can pretend that you’re too cool for classic heavy metal, played by master musicians, two bands, one who laid down the groundwork for this genre we’re obsessed by, one who took that blueprint and ran with it to high heaven, but the smiles on the faces and levels of excitement as we file out of the venue just go to show that heavy metal, in all its kitschy, over-the-top, pantomime-level brilliance isn’t going anywhere and we’re humbled to have witnessed it in all its glory tonight.