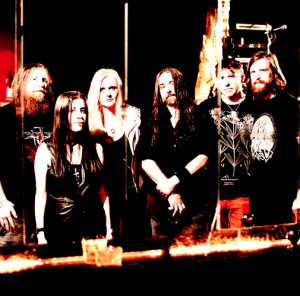 However all parties have regrouped for album number #6 (well, #7 if you count ‘Fields’ and ‘Church Of Broken Glass’ as two albums) and it’s amazing. Imagine Slough Feg gone even more bonkers; if Pink Floyd had a heavy metal cousin, it would be Hammers Of Misfortune. Mindblown by the layers on ‘Dead Revolution’ we just wanted to find out what the ingredients were of this metallic broth and founding member John Cobbett kindly obliged by making us a mix tape of what the band were listening to when making the record.

Judas Priest – ‘Sinner’
I went back to three Priest albums a lot over the past few years: ‘Sad Wings Of Destiny’, ‘Sin After Sin’ and ‘Stained Class’. I could’ve picked any number of tracks from that early period, but I settled on ‘Sinner’. I mean, it’s a masterpiece! This song has it all; locomotive groove, beautifully executed vocals, psychedelic guitar freakouts, menacing, evocative lyrics and some proggy, classical cadences. I drew a lot of inspiration from this stuff.

Dead Boys – ‘3rd Generation Nation’
On the title track, ‘Dead Revolution’ I take a very clear near-quote from this song, where Stiv Bators snarls “The better world you tried to build / Exploded in your face / Yet yer all laughin’, laughin’ at ME!?”. The Dead Boys have always been near and dear to my heart, and this song has an attitude and message that cuts right to the chase. Maybe not so much of a musical inspiration, but the attitude here definitley provides more than a few strands of DNA to ‘Dead Revolution’.

Rainbow – ‘Kill The King’
A lot of people are citing ‘Highway Star’ as a reference for ‘Flying Alone’, but the real inspiration for that tune is Rainbow’s ‘Kill The King’. I’ve always wanted to try and write a song as awesome as this one, which I think is basically impossible. I get chills every time I hear it. Dio in his prime, absolutely on fire!

Aeternus – ‘Black Dust’
For the midsection of ‘Here Comes The Sky’ I wanted a specific feel, you could almost say “Trollsk” feel. The fairytale lyrics seemed to warrant this, and I love this kind of black metal. Aeternus conjure this atmosphere masterfully, and I thought it would be a a bit mischievous to “Americanize” it by adding some slide guitars. Check out ‘Black Dust’; the drunken 6/8 groove, and the beautiful mixture of major and minor chord changes. Dark, mystical and heavy as hell.

Futur Skullz – ‘Waste Not Want Not’
This is a local band featuring Josh Smith of The Fucking Champs and Weakling. They only put out one album, but it’s killer. Josh is one of my favourite guitarists and he’s a master at guitar tone. Having seen The Champs, Weakling and Futur Skullz live many times, the guitars always sounded amazing. When Josh disbanded Futur Skullz I bought his amp and speakers off him. Of course I didn’t manage to get his tone, but the gear served me well on ‘Dead Revolution’.

Scorpions – ‘Blackout’
Scorpions are always high on my list, but normally I worship at the alter of Uli Jon Roth (notice how we quoted the solo in ‘Sails Of Charon’ in the lead section of ‘Dead Revolution’). This time I decided to explore the territory of their mid-period (after ‘Taken By Force’ and before ‘Love At First Sting’). The original working title of the title track was ‘Whiteout’. It was a joking reference to this song. I wanted to write a song like this, which of course turned into something very different by the time we were finished with it.

The Stranglers – ‘(Get a) Grip (On Yourself)’
Again with the Deep Purple comparisons, which are not at all inaccurate, but due credit must go to David Greenfield of The Stranglers. His style of weaving keys over and around a riff is a thing of beauty. It’s interesting to note that The Stranglers employed super heavy bass tones and virtuosic keyboards with cleaner, more jangly guitars. This approach reminds me of classic Bill Buford/Chris Squire era Yes, which I will get to later on this list.

Van Halen – ‘Last Night (Unreleased)’
Yes, Van Halen. This is from a large collection of unreleased demos, which provides an interesting view on the evolution of some of Van Halen’s songs (this one eventually became ‘Hang ‘Em High’, but I prefer this version.) Early Van Halen has been a huge influence on Hammers over the years (compare the opening riff here to the main verse riff on the title track of ‘The Locust Years’). The energy of early, first-three-albums Van Halen is unparalleled. The band are bouncing off the walls with glee, and it’s infectious.
Putting the insane genius of the guitar playing aside, we have to acknowledge the background vocals, Van Halen’s secret weapon. They’re a damn horn section, laying down the hooks and choruses that hold the songs (and David) together. Without the background vocals, this band would never have made it. Special mention must also be made of Eddie’s often overlooked rhythm guitar, and the killer sub-arrangements he builds into his lead sections. The one here is a great example.

Yes – ‘Starship Trooper’
A breathtakingly beautiful song, with it’s phased guitar arpeggios, vibrato bass, majestic Hammond organ and cosmic lyrics, somehow effortlessly segueing into distinctly American travis-picked acoustic guitar with choral vocals. The epic scale and inventiveness that Yes displayed during this period has yet to be equalled. Oh yeah, and get a load of that coda! The organ in this section is a big reason why we added Hammond organ to our sound. I’ve listened to this a million times and it still gives me gooseflesh.

Sweet – ‘Sweet FA’
Listen to the intro to ‘The Precipice’ and then listen to the intro to ‘Sweet FA’. Yeah, that’s right, a direct homage to Sweet right there out in the open. This song embodies so many things that I strive for in Hammers; the energy, the unhinged creativity, the soaring vocal harmonies. The coda is completely batshit. These guys are going for broke, probably high off their asses, just killing it.
One of the key things to understand about The Sweet is that they were pigeonholed as a glittery, effeminate bubblegum-singles group early in their career, but desperately wanted to be taken seriously as a legitimate hard rock band. They strove mightily – on B-sides and album tracks – to overcome this, which resulted in some blisteringly high energy playing (and cartoonishly “tough guy” lyrics, but the punchline here is: “You won’t get rough / ‘cause it’s all a bluff“). They had something to prove. When they got going on a track like this one, they were unstoppable.

You can listen to ‘Dead Revolution’ below – and you should!