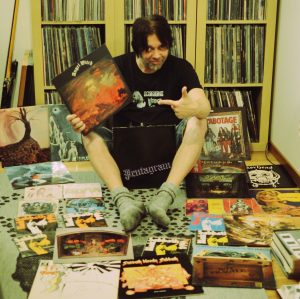 “I’m so happy that things are moving in the right direction,” Leif comments. “I’ve been putting my heart and soul into the new EP and album for about two and a half years now. So it’s very relieving to finally see an end to all the work. Soon the world will hear the sound of the catacombs coming to life!
“I’m currently doing the final touches to the album. It is recorded, mixed and mastered, and has come out absolutely fantastic! Just a few graphic things left with photos, booklet etc. and then it will be ready. I’m very proud of this album! It sounds so good, therefore the visual aspect has to be just as great, when it sees the light of day in March next year!”

The band just released a sneak peak from their EP which you can listen to below, as well as announce they will be gracing the stage of Roadburn Festival in April 2017.

We caught up with Leif to find out what’s been on his stereo lately, inspiring this latest dose of doom perfection from both Candlemass and beyond… this is his ‘Death Thy Lover’ mixtape to ease us into darker, colder nights…

2. BLACK SABBATH ‘Headless Cross’
“Fantastic record! So many great songs! Sadly, not that talked about these days. I love the title track and many more from this timeless album.”

3. URIAH HEEP ‘Bird Of Prey’
“Great but a bit overlooked! Early heavy rock meets grand progressive elements on Heep’s second effort. The opening track ‘Bird Of Prey’ and the title song are absolutely spine-chilling! After they made even greater things, but ‘Salisbury’ has got a special place in my heart.”

4. ANVIL ‘Metal On Metal’
“Essential for everybody into real metal! What they did in the ’80s set the standard for metal music for decades to come! I Love ‘Forged In Fire’ too, but for some reason it was ‘Metal On Metal’ that sat on my turntable last summer.”

5. CIRITH UNGOL ‘King Of The Dead’
I’m am always inspired by Cirith Ungol! Now and 30 years ago! Those first three album are so good with the ‘King Of The Dead’ as the jewel in the crown. Both the album and the song!”

6. CANDLEMASS ‘Bewitched’
“I listened to ‘Nightfall’ a bit last summer before I started writing the EP. Guess I had to do some research! I had a glass of wine, listened to it a couple of times. I can’t say that ‘Death Thy Lover’ is inspired by ‘Nightfall’, but mentally I put myself in Upplands Väsby 1987 and wrote the riff for ‘Sleeping Giant’.”

1. RUSH ‘Fly By Night’
Their second album. Not so much Zeppelin as the first one, more straight, basic heavy rock with a little hint about what to come next. I just say ‘By-Tor’… WOW! A hint of what to come! And the title track is a superb single actually. Rush didn’t do many of those.”

2. LESLIE WEST ‘This Wheel’s On Fire’
“Wonderful Dylan cover from the first ‘Mountain’ album. One of the best guitar players ever!”

3. MOTÖRHEAD ‘White Line Fever’
“Another album I listened to during the summer of 2015 before I started the work on ‘Death Thy Lover’. Raw… Unpleasing! The true ‘Head if you ask me, featuring Lemmy, Philthy and Fast Eddie Clarke. Up to ‘Iron Fist’ they made magic together! Nothing is dirtier than their first album!”

4. THOR ‘When Gods Collide’
“Surprise! But I listened quite a lot to the mighty Thor when I grew up! The songs are a bit cheesy, I admit that, but still I must also say that there are some cool riffs on the ‘Unchained’ record, and this song is not bad at all.”

6. T.REX ‘Jeepster’
“Electric Warrior! Another amazing cover by Hipgnosis and a great album too. But I must say that the cover alone is enough to get my imagination flying! I bought a nice second hand copy of it in the beginning of last summer, and listened to it everyday for six months!”