OOZING WOUND INTERVIEW: “YOU’VE GOT TO BE A LITTLE DIAMOND DAVE, YOU CAN’T BE GLENN DANZIG ALL THE TIME” 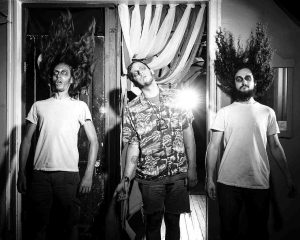 On tour in the UK right now, Chicago thrashers OOZING WOUND like to take their metal seriously, but it still oozes fun

“This music is fun and we don’t try to over think it,” states Zack Weil, one third of Chicago’s raddest, anti-bullshit thrash band Oozing Wound. “Most bands don’t understand how cheesy they are, but we do understand how cheesy we are on a base level. You’ve got to be a little Diamond Dave, you can’t be all Glenn Danzig all the time. I mean, we’re not firemen, we’re not saving people’s lives! Sure we are serious about rocking, but why should we posture with arms folded and furrowed brows? You’ve got to keep it in perspective that being in a band is cool! It sure keeps us sane, at least. Outside of the band, everything is serious and a drag. So why not have a good time with music?  That’s why we embrace weird humour and puns in our song titles so much” he explains.

A perfect example of this is ‘You Owe Me, Iommi’ – which is the title they gave to their “slow Black Sabbath rip off song on the new album ‘Whatever Forever’.” Couple this clever word play with a collection of hilarious music videos, and it’s safe to say that the humour of Oozing Wound is equally as infectious as their killer riffs. But it’s not just about the riffs, bassist Kevin Cribbin is also “really proud of some of the noises on this record. The noises on ‘You Owe Me, Iommi’ sound like little critters coming to get ya! There’s some spaceship sounds on this record too. Basically all our songs are like our stupid noisy kids that you want to ignore after a while. It’s crazy to think that when we started Ooze, I vowed to just use one effects pedal. I was tired of all my pedals, they were giving me a headache. I wanted to impose that limitation on myself to create something different. But look at how well that went, now I’m using eight different effects pedals on the new record – I don’t know what happened!”

Originally opting for the band name “Wizards of Ooze, which is the awesome name of a portable toilet brand in the States”, the dudes concluded that “there’s a lot of wizard bands out there already, the world of metal doesn’t need another bunch of wizards. If we don’t have wizard in our name then we can be stoners without people expecting that we are straight away! We can reveal that at our leisure.”

Eventually they settled on the delightfully disgusting Oozing Wound moniker, with Zack attributing that the band “are all covered in oozing wounds. My face is basically one giant scab.”

Whilst on the subject of their most oozing-est of wounds, Kevin describes how “last year on tour, my ear exploded in the van, it was pretty gross. Plus Zack cut open his ankle, it was so bad he thought he was going to get gangrene!” Perhaps tour infections can be expected when the band admittedly “love playing in moldy basements. I would rather play in the grossest basement that sounded good, then the biggest auditorium in the world because they always sound like shit!”

“I don’t understand how metal bands sell out arenas. I’ve been to arena shows before and I never have a good time, so why would we ever wanna play a show like that? Those huge buildings are only made for one thing and that’s hockey,” surmises Zack. Describing touring in America as “a drag”, Oozing Wound with their down-to-earth philosophy prioritise simply playing the places they enjoy.

“Touring in Europe is actually fun. I just love that we’re a small American band who have played all the way over in Germany, but we still haven’t played in California! Who needs to go to LA? Not us!”